On Tuesday, February 19, 2013, the Stafford Board of Supervisors approved a Transfer of Development Rights ordinance on a 5-2 vote, with Chair Susan Stimpson (R-Falmouth) and Supervisor Cord Sterling (R-Rock Hill) opposing the ordinance (read the news story). The ordinance allows some property owners to transfer development rights off of the “sending” area”–an area in the Aquia District, including the Crow’s Nest peninsula—to properties in the “receiving area” in the Courthouse area (read the ordinance, including maps of the sending and receiving areas).

When properly implemented, TDRs protect sensitive areas from development while moving development to more appropriate areas with adequate infrastructure. However, as approved, the Stafford TDR is NOT such an ordinance.  Instead, it uses taxpayer dollars to subsidize a windfall for developers while hiding behind the false claim that it offers protection for environmentally sensitive lands (another news story). There are three particularly problematic aspects to Stafford’s TDR legislation:

First, Stafford’s TDR ordinance fails to achieve the desired outcomes of protecting the rural and agricultural parts of our County, and in particular, saving all of Crow’s Nest.

In reality, the TDR ordinance does very little to protect Crow’s Nest. As can be seen from the map accompanying the TDR ordinance (map on the bottom), only a small portion of the Crow’s Nest Harbour lots are eligible for TDR (the dark green areas on the map with blue hatching).

In the map on the top, the area in red is the area, including Crow’s Nest Harbour, that has not been included in previous purchases. (Parcel “A” in green is the first purchase completed in 2008 and Parcel “B” in yellow is the Phase 2 purchase completed in 2009.) The map from the TDR ordinance, on the bottom, shows the Harbour lots (outlined in white and shaded dark green), and those lots that are eligible for TDR (only the dark green areas with blue hatching). 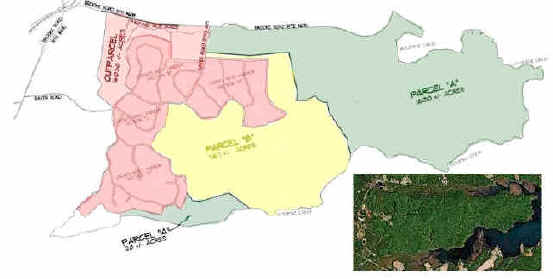 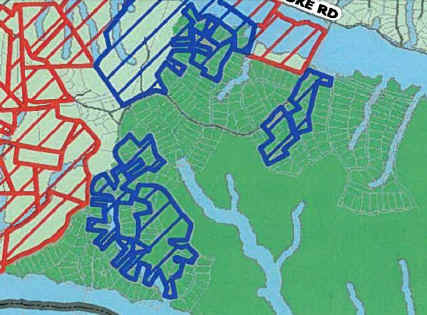 The TDR ordinance does not contain a single provision guaranteeing that land placed in the TDR program will become part of the Crow’s Nest Natural Area Preserve. The legislation does not even provide for public access to land placed in the TDR program. Not only that, the legislation allows uses such as logging, commercial campgrounds, and construction of buildings up to 6,000 square feet.Not only does this ordinance fail to protect much of the remaining acreage, it is fundamentally unfair to individual lot owners in Crow’s Nest Harbour. Because of the “common ownership” requirements in the TDR ordinance, only the lots in the Harbour owned by corporations will be eligible for TDR.

The Courthouse receiving area has A-1 and R-1 properties, both of which call for single family dwelling units, so presumably a development right for those land uses is equal to at least the County’s cash proffer guideline amount of $43,101 per unit. Since the Board cannot collect those proffers on units built using transferred development rights, 688 development rights coming from the sending area equate to $29.7 million in lost cash proffer revenue. In the alternative, property owners can chose to take a property tax waiver (a tax “abatement”) in the amount equal to the value of the development right, equating to a similar loss in property tax revenue.

Third, the TDR ordinance removes what are essentially high density rezonings from the control of the Board and places them out of sight from the public.

The 83 acres of A-1 land in the receiving area currently could produce a maximum of 27 houses. Under this TDR ordinance, the number of houses by-right could leap to 187 on the A-1 properties—and the Board would have no say in it. And even more alarming, for the R-1 properties on 42 acres in the receiving area, the number of houses could skyrocket nearly tenfold, from 63 to 591—again, with no say so from the Board.

Save Crow’s Nest continues to believe that a properly constructed TDR ordinance can protect property rights and taxpayers, while furthering the goals of developing a sustainable commercial tax base, locating development within appropriate areas of the county, and protecting priority areas such as Crow’s Nest from development. The Board of Supervisors and the Planning Commission can amend the TDR ordinance and the Comprehensive Plan amendment to make it right. Please contact them now to urge them to make these amendments: