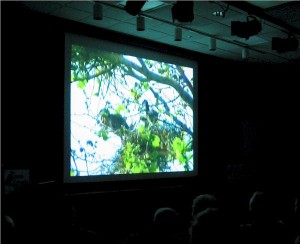 The blue herons of Crow’s Nest fill the screen.

On August 30, 2005, an overflow crowd of nearly 200 gathered at the Central Rappahannock Regional Library in Fredericksburg to watch the debut of “Crow’s Nest: Stafford County’s Last Refuge.”  The new 12-minute film includes some magnificent images of Crow’s Nest and features local individuals active in the effort to preserve the nearly 4,000-acre peninsula. The film is a collaborative effort by Archer DiPeppe, Ken Jordan, and Julie Jordan, who donated their services.  (Thanks to them for their work on this film!)  (You can read a recent article about this video here.)

After the film, Cecelia Kirkman, a “Save Crow’s Nest” volunteer offered an update (see below) on the status of efforts to preserve the peninsula.

Read the Stafford County Sun’s coverage of this event. You can also read a Free Lance-Star update about the video.  Additional showings have since occurred at the Porter Library, Hartwood Days at the Hartwood Presbyterian Church, the Falmouth Flats Fly Fishers meeting, the Battlefields Sierra Club “open house,” “Salute to Stafford Day,”  the Friends of the Rappahannock “Riverfest 2005”  and more!

September’s issue of Front Porch Fredericksburg features Archer DiPeppe’s reflections on why he made the video, and has an accompanying editorial, Values.

To schedule a showing of “Crow’s Nest: Stafford County’s Last Refuge” for your organization, homeowner’s association, church, or other group, or to hold a house party featuring the video, contact Archer DiPeppe at (540) 373-9636. 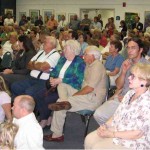 It was standing room only for the debut of the Crow’s Nest video. 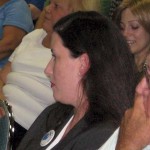 Julie Jordan–who collaborated on the film with Ken Jordan and Archer DiPeppe–sits in the audience at the debut. 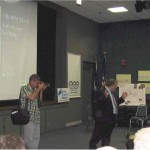 Filmmaker Archer DiPeppe introduces the video, while a local reporter takes his photograph. 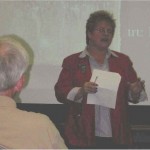 Supervisor Kandy Hilliard fielded some questions about Crow’s Nest, including some from audience members frustrated at the lack of action by the Board of Supervisors. 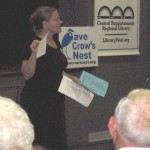 Save Crow’s Nest representative, Cecelia Kirkman, provides an update on Crow’s Nest after the film was shown. 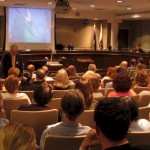 The video was later shown at the Board of Supervisors meeting. 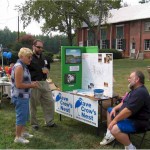 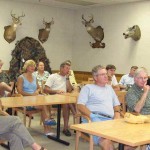 The video was shown at the Falmouth Flats Fly Fishers’ meeting (at the Gander Mountain store) where questions were answered about the effort to save the peninsula.

First, here’s what we know.

We know that the Crow’s Nest peninsula is an amazing piece of land, as we have just seen in this film.

We know that people in this area are fed up with runaway growth and the things that it brings, especially the traffic congestion and the higher taxes needed to pay for new schools, roads, and other services.

We know that people in this region, just like you, are determined to prevent the destruction of Crow’s Nest.

But we also know that a development plan is quickly moving forward—right now–which could lead to over 1,000 homes being built on Crow’s Nest. The plan is a by-right development plan, which means that it can move forward without a single official public hearing.  The plan is being advanced by the primary owner of Crow’s Nest, a company called Stafford Lakes Limited Partnership (a.k.a. K&M Properties).  The sole partner in Stafford Lakes LP is an out-of-state corporation called Stafford Lakes Corporation. This corporation is headed by four men: Kamel Tabarra, Walid Kattan, John O’Connell and Warren Montouri—none of whom live in Stafford.

Make no doubt about it, the plan they are advancing would destroy Crow’s Nest as we know it.

And I could go on, but you get the picture.  It’s bad, folks.

Here’s the other thing that we know.  The Stafford County Board of Supervisors has not taken a single official action to protect Crow’s Nest from development.  For example, it has not moved to accept a $30 million dollar low-interest loan offered by the state to help purchase and preserve Crow’s Nest.  This loan is crucial because, for the first time, a purchase of Crow’s Nest could move forward with a guarantee of funding.  That’s never been available before, but the Board has not acted to accept the loan.

The Board has also failed to move on any other measures, such as something known as the “Agricultural Performance Standards,” which would have protected Crow’s Nest and other areas with terrain like it from inappropriate construction.

Let me move now to what we think we know.  These are items that we can’t confirm for certain.  That’s because not a single member of the Board of Supervisors has been willing to speak publicly about what they are or are not doing to save Crow’s Nest.  Not a single one.

Instead, the entire Board has circled the wagons and told everyone—including the press—that they can’t talk about any specifics regarding Crow’s Nest because it is under litigation.  This an absurd premise because there is not any litigation against the County or the Board of Supervisors. The corporate owners of Crow’s Nest are suing the Board of Zoning Appeals, not the Board of Supervisors—legally these are two completely separate entities.  When you hear a Supervisor say they can’t talk specifics about Crow’s Nest because of a lawsuit, they are either badly misled by poor legal advice, or they are being evasive.

So since our elected representatives won’t talk to us—or to you, or to the press— these items have to stay in the category of things that we think we know.

First, we think that not only has the Board of Supervisors failed to act to accept the state’s low-interest loan, but they have already told the State that they will reject two-thirds of that loan.  In other words, they are sending back 20 million of the 30 million dollar loan.  If this becomes official, it will leave the County unable to negotiate for the purchase and preservation of the entire peninsula.  It will mean County officials have given up on saving Crow’s Nest.

Second, we think that the State has made an offer to purchase the tip of Crow’s Nest, about 1,500 acres—less than half—but that offer was rejected by the developers.

Based on what we know and what we think we know, we now see the preservation of Crow’s Nest as depending on a combination of three things:

First, we—you and I—have got to insist on accountability from our elected officials.  They cannot—week after week, month after month, year after year—say “we can’t talk about Crow’s Nest,” or “We’d like to help but we can’t do anything about Crow’s Nest because our hands are tied.”

As I mentioned earlier, they can talk about Crow’s Nest, they just won’t.

In addition, if our elected representatives instructed County Planning staff to actually enforce the rules and regulations that are already in place, a development of the size and nature being advanced for Crow’s Nest would never be built.  Instead, the Board of Supervisors is funding an attorney to fight the efforts of a local activist, who has been trying to get the Planning Department to follow its own rules and policies in the review of the Crow’s Nest plan.

And there are many legal tools that the Board of Supervisors could use to protect the peninsula from development. A temporary moratorium on new subdivision plans, Agricultural Performance Standards, an amendment to the comprehensive plan, a rezoning to make Crow’s Nest consistent with surrounding properties and the use of eminent domain are just some of the many powerful tools the Board of Supervisors has chosen not to use.

So the first item is for you to speak out, contact your officials, tell them you vote, and help them find a backbone to finally stand up and act to save Crow’s Nest.

Second, as I mentioned, if the law were actually followed and enforced, the threat to Crow’s Nest could be radically reduced.  It may turn out that litigation is the only recourse to ensuring that all the County’s rules and regulations are followed.  This will cost money and we will be coming to you in the coming weeks for financial support of these legal efforts.

Third, it is time for the building and development industry in Stafford to step up to the plate. We’ve heard a lot recently about how this industry is for progress in Stafford County. Now, it is time for them to put their money where their mouth is. A true “win-win” solution for Crow’s Nest is to move the number of residential units on it to a designated growth area in the County. Under this trading density plan, Crow’s Nest is preserved, growth is concentrated where it belongs, and there is minimal cost to the taxpayers. But it will take cooperation from Stafford area developers and good faith negotiating from Stafford Lakes LP to make it happen.

None of these things is going to happen unless, you, me and everyone in this room acts to show visible support for saving Crow’s Nest. So tonight I’m asking you to commit to doing one thing: come to the Stafford County Board of Supervisors meeting on Tuesday September 20th at 7 pm.  On that night, the film you have just seen will be shown to the Board.  We need you there to let the Board and the developers know that we have just begun to fight.