On March 2, 2004, speakers from Save Crow’s Nest, including students from the Environmental Club at Colonial Forge High School, continued to call upon the Board of Supervisors to act to prevent development of the peninsula.  In particular, some speakers called upon the Board to hold a special bond referendum to fund the purchase and preservation of Crow’s Nest. 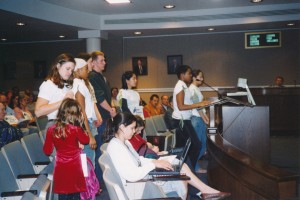 Students, with placards and home-made T-shirts that read “Save Crow’s Nest,” stand to speak to the Board of Supervisors. 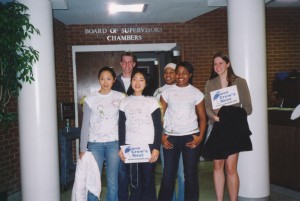 Afterward, the students pose outside the Board chambers.

During the public comment period, Linda Thomas read a statement on behalf of “Save Crow’s Nest” that said:

“Two weeks ago, Save Crow’s Nest asked this Board to support a bond referendum to save the entire Crow ’s Nest peninsula.  We are glad to hear that now there may be support on the Board for doing just that.

We believe that once the economics of this issue are laid bare, citizens and taxpayers of Stafford County will overwhelmingly support a park bond to buy Crow’s Nest.  The choice we face is stark and clear:  we either invest roughly $32 million dollars to buy and preserve Crow’s Nest forever or we spend well over $70 million dollars—more than twice as much—to, in effect, subsidize more growth, more development, and more traffic.  Saving Crow’s Nest just makes good economic sense for the County’s taxpayers.

The Crow’s Nest issue has been lingering for years.  If a viable solution in the form of a bond referendum is now in sight, then the County should move swiftly to pursue this avenue of action.  The property owners deserve to know that a purchase is possible and the citizens of Stafford County deserve to finally know that Crow’s Nest can be permanently protected.

Rather than waiting for the general election in November, we support the idea of a park bond referendum to be held as soon as possible.  Let me mention three reasons for this:

First, Crow’s Nest is in immediate danger.  It’s that simple.  We fear that a November referendum may come too late for parts of Crow’s Nest.  The longer the County waits, the more economic incentive the owner will have to proceed with logging or development.  We need an immediate referendum to help prevent this.

Second, holding a referendum in the middle of a presidential election virtually guarantees that the issue will be lost amongst the presidential coverage.  The media’s attention will be focused on the national campaign and the important information surrounding the Crow’s Nest issue is unlikely to reach voters.   A special election held earlier will ensure that the Crow’s Nest issue receives the attention it deserves.

Third, holding a referendum in the middle of a hotly contested general election increases the likelihood that this issue will get caught up in partisan politics.  I trust nobody here wants that to happen.  The issue us just too important for Stafford County.  “Save Crow’s Nest” is a non-partisan group.  Supporting the preservation of Crow’s Nest has always been a non-partisan issue.  Let’s keep it that way by separating the bond referendum from the general election and by getting leaders from both parties to step up and endorse passage of this bond.

That would show everyone that on this important issue our leaders can unite and will stand up to protect the interests of Stafford County.  We have repeatedly heard from you that you support saving Crow’s Nest.  Here’s a chance for all of you to come together to do just that.

Don’t let the fate of Crow’s Nest get lost in a general election.  Support an immediate special election to give this unique local Stafford issue the attention it deserves.”