[Note: The original Crow’s Nest Report Card was used from 2006 to 2008 to summarize how Stafford Supervisors voted on legislation that could affect Crow’s Nest.  That Report Card is reproduced below as an image.  Links do not work but explanations of the items that were voted on can be found by scrolling down.] 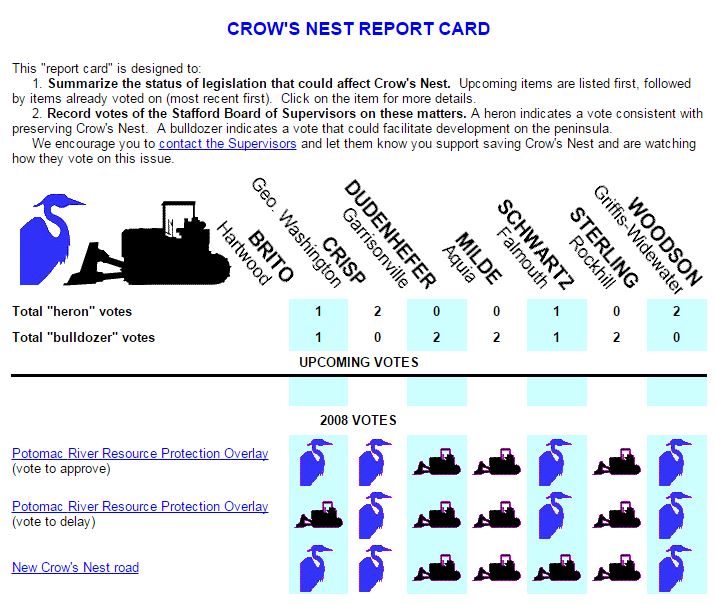 Potomac River Resource Protection Overlay district.  This ordinance provides additional protections to ensure that development does not dump mud into creeks that feed into the Potomac River. These creeks surround four state and county parks, including Crow’s Nest. The Board voted 4-3 to approve this legislation. The vote to approve took place after the legislation had been deferred for a five month period.

New Crow’s Nest road.  The Board voted 4-3 to add back into the 2009 transportation plan a new road that dead ends directly at the Crow’s Nest property owned by Stafford Lakes LP (a.k.a. K&M Properties) in the 2008 transportation plan.  This project could help facilitate development on the peninsula.  We have always advocated that this project be removed from the plan, and were hopeful that the Board would follow the Planning Commission’s recommendation to remove this road from the transportation plan. Unfortunately, Supervisor Schwartz flipped his previous position, and for the first time voted in favor of this road project. 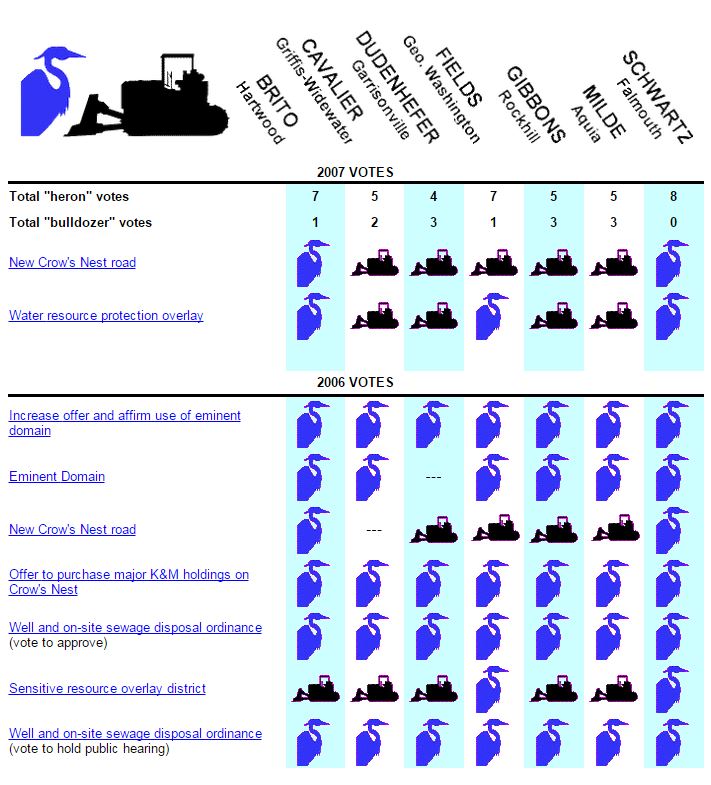 New Crow’s Nest road.  The Board voted 5-2 to keep a new road that dead ends directly at the Crow’s Nest property owned by Stafford Lakes LP (a.k.a. K&M Properties) in the 2008 transportation plan.  This project could help facilitate development on the peninsula.  We have always advocated that this project be removed from the plan.

Water resource protection overlay ordinance.  This ordinance would have provided additional protections to ensure that development did not dump mud into creeks. Most importantly, in certain designated areas of the County, such as Crow’s Nest, it would have expanded the buffers around creeks to include steep slopes and highly erodible soils.
This ordinance was a scaled down version of the sensitive resource protection overlay previously considered by the Board.  In a 4-3 vote, the Board of Supervisors voted against sending the Water Resource Overlay ordinance to a public hearing before the Board. Instead, after sitting on it for more than a year, they sent it back to the Planning Commission for a third time. That move effectively killed the legislation by burying it in the County’s bureaucratic process.

Increase offer and affirm use of eminent domain. On September 5th, the Stafford County Board of Supervisors voted to increase by $2.7 million their offer to purchase a portion of Crow’s Nest. An offer will now be made to Stafford Lakes LP (also known as K&M Properties) for $33.2 million. The increased offer was based on the market value determined by a recently completed revised appraisal. The Board also voted to initiate condemnation proceedings if Stafford Lakes, LP refuses the offer.

This is a positive first step, and goes a long way to demonstrate the Board’s commitment to protect Crow’s Nest from development. However, we remain concerned that the offer is for only a portion of the property, and does not include any of the property owned by Stafford Lakes, LP in the “Crow’s Nest Harbour” subdivision platted out in the 1970’s. That portion of the peninsula is directly adjacent to the heron rookery.

Eminent domain. The Stafford County Board of Supervisors unanimously voted to move forward with eminent domain proceedings to purchase Crow’s Nest. (Read the news story.) This follows the Board’s previous action of making a $30.5 million offer (see below) to Stafford Lakes LP (aka K&M Properties) for a portion of the property.

Eminent domain is a legal action governments can take when a property owner is not willing to sell at a fair price. The purpose of the legal proceeding is to get a “fair market value” for the property. A panel of commissioners, who are local landowners, is appointed by the circuit court to determine just compensation for the property owner. (Read an op-ed and a letter about eminent domain and Crow’s Nest.)

New Crow’s Nest road.  The County’s transportation plan includes a new road that dead ends directly at the Crow’s Nest property owned by Stafford Lakes LP (a.k.a. K&M Properties).  This project was not identified as a hazardous area or a priority for the County by the Youth Driver Task Force, but it could help facilitate development on the peninsula.  We advocated that this project be removed from the plan. At the April 18th Board meeting, Supervisors Schwartz and Brito introduced and seconded a motion to remove the road to Crow’s Nest from the plan but the motion was defeated in a 4-2 vote. The Board of Supervisors went on to vote 4-2 to approve the plan.   (Supervisor Cavalier was not present at the meeting.)

Offer to purchase major K&M holdings on Crow’s Nest. This resolution authorizes a bona fide offer for the purchase of K&M’s two major properties on Crow’s Nest (see map) based on a recent appraisal value.  However, it does not include land in the platted Crow’s Nest Harbor subdivision.

Well and on-site sewage disposal ordinance.  This ordinance requires an Authorized Onsite Soil Evalutor (AOSE) to certify on preliminary plans that the location of wells and on-site sewage systems (such as septic drainfields and alternative systems) meet Health Department Requirements. (Currently, this is not required until a later planning state.)

On January 17th, the Board voted on a resolution to hold a public hearing on this ordinance. The ordinance will help ensure that adequate information is provided early in the planning stage to determine if areas with challenging terrains, such as Crow’s Nest, have adequate capacity to provide water and sewage disposal for the proposed number of lots. We advocated that the Board act in favor of bringing this ordinance to a public hearing as quickly as possible.

On March 21st, the Board approved this important legislation.

Sensitive district overlay ordinance.  This ordinance will provide additional protections to sensitive environmental areas of the County. Most importantly, in certain designated areas of the County, such as Crow’s Nest, it will expand the buffers around creeks to include steep slopes and highly erodible soils.

We think this important environmental action is long overdue, and advocated that the request to grant an extension be denied and the Board act quickly on this ordinance. Instead, on January 17th, a majority of the Board, except for Mr. Fields and Mr. Schwartz, voted to send the ordinance back to the Planning Commission, further delaying action on this important legislation.

Preserving cemeteries.  The original ordinance (O06-39) would have required a 50 foot buffer around the area of a cemetery and provided guidelines on providing access. The Daniels family cemetery is located on Crow’s Nest, and needs protection. We urged the Board to pass this ordinance. Instead, the ordinance was substantially watered down.  Therefore, it was removed from our report card.

Preserving cultural resources.  The original ordinance (O06-47) required that developers conduct certain studies of historical resources on proposed development sites, and develop a cultural resource protection agreement for significant historical sites. The Crow’s Nest peninsula is home to a wealth of cultural and historical resources. A surveyof only 450 acres of peninsula identified 47 new archaeological sites, 14 of which meet the criteria for listing on the National Registrar of Historic Places. We urged the Board to pass this ordinance.  Instead, the ordinance was substantially watered down.  Therefore, it was removed from our report card.