After an extended quiet period regarding Crow’s Nest, the Summer and Fall have been active with changes– some hopeful, some worrisome.  Here’s an update on:

Land Acquisition. Governor McAuliffe’s office recently announced $6.4 million in land conservation grants that included a matching grant of $433,000 to Stafford County to purchase an additional 127 acres of the Crow’s Nest peninsula. The total cost of the four properties (tax map parcels 47-39, 47-39B, 47-39C and 47-41) is $866,000. The County will pay the remaining $433,000, as well as an additional $41,000 in additional costs associated with the purchase. The Board of Supervisor’s agenda item regarding the purchase can be found here.

The land involved is in two parcels on the southern side of the peninsula. A small portion of one piece is adjacent to the Potomac Creek heron rookery and 1,800 feet from the existing boundaries of the Crow’s Nest Natural Area Preserve (CNNAP).  The acreage will be conveyed to the state’s Department of Conservation and Recreation (DCR) to be added to the existing preserve. The land is an added buffer for the heronry and is expected eventually to be part of the Crow’s Nest hiking trail system. It also offers some protection for the Small Whorled Pogonia, a member of the orchid family that is a federally-listed threatened species.  (Threatened species are likely to become endangered in the foreseeable future.) 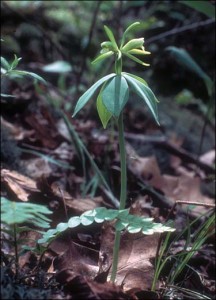 A Small Whorled Pogonia, from the U.S. Fish and Wildlife Service site.

Road development.  The biggest project this year has been the completion of 1.5 mile road development from the Crow’s Nest main gate on Raven Road to a small parking lot in the heart of Crow’s Nest.  (See blue line on map below.) 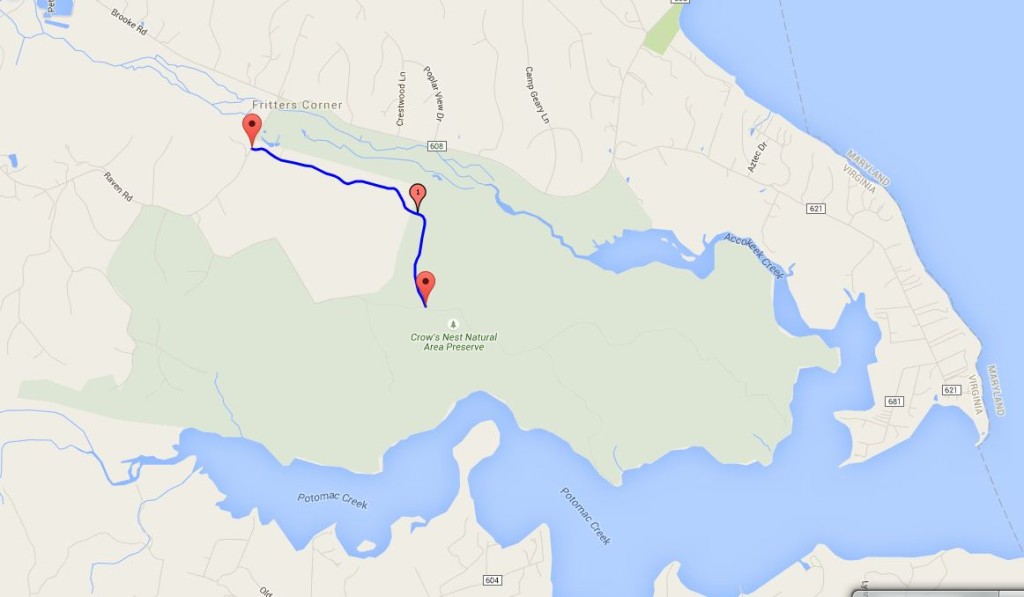 The road on Crow’s Nest winds 1.5 miles to a small parking lot.

The first half of the road winds past privately-owned land that is not a part of the existing Natural Area Preserve and that is still threatened with development. The dirt road had long existed but was deeply rutted and subject to mud and standing water after rains.  Therefore, it was really only accessible to four-wheel drive vehicles.  The development project installed new drainage culverts, built up the road bed, leveled the road, and graveled the entire length.  It is now accessible to cars. The road is expected to open shortly after a new bridge on Raven Road is completed (see next item below). 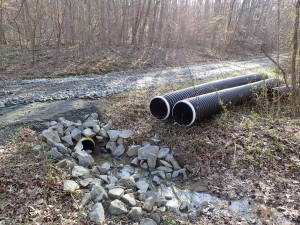 The first phase of the road development included adding culverts for drainage. 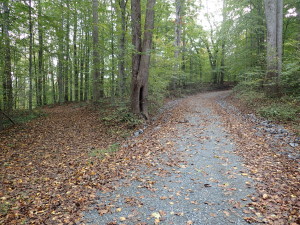 The project also involved adding signage to the road and hiking trails.  (Caution: The trails are not yet fully marked.) The parking lot now features a map and some informational signage. 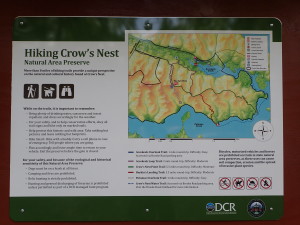 One of the new signs that marks the beginning of trails on Crow’s Nest.

The road construction is a double-edge sword.  It will certainly allow more public access to Crow’s Nest, making it easy to drive to the parking lot and hike trails from there. However, having easy access to the heart of Crow’s Nest for the first time—far from a well-traveled public road—may result in some nuisance issues such as littering, illicit drinking and drug use, ATV riding, and poaching, some of which has been evident in the area before.

More significantly, the creation of a well-developed road could be one step towards the abandonment of efforts to preserve the rest of the peninsula.  With access to the existing preserve now guaranteed, there may be less incentive to save the remaining, threatened portion of Crow’s Nest.  Indeed, easy access to a Natural Area Preserve could be a selling point for new housing development along Raven Road and in the undeveloped adjacent Crow’s Nest Harbour subdivision.  We can’t let that happen. 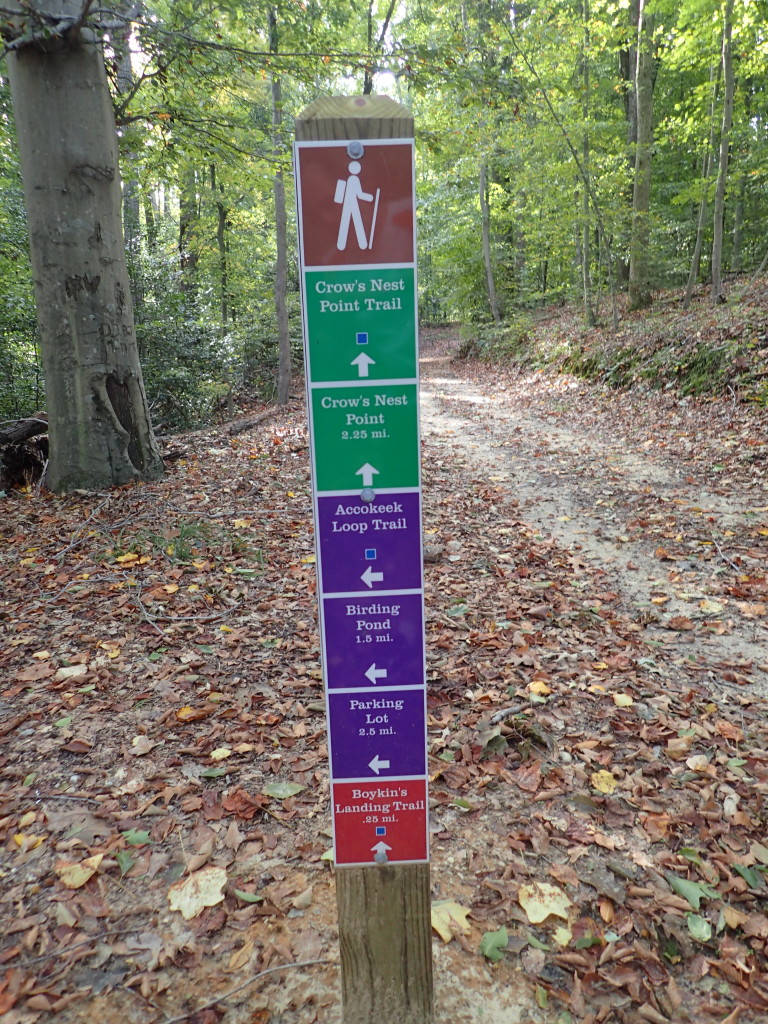 Some trail markings have been installed.

Bridge Replacement.  A small bridge over Accokeek Creek (X on the map below) is on Raven Road between the Crow’s Nest main gate and Brooke Road.  A few years back, the original wooden bridge had been supplemented by a temporary metal bridge and now that bridge is begin replaced with an even more substantial one.  Installation work is nearly complete  That bridge, which will make access to Crow’s Nest easier, is also a mixed blessing since it will also facilitate more traffic on the rural-feeling Raven Road that leads up to Crow’s Nest.  More traffic will likely mean more trash that we routinely encounter along that road during our trash pick-ups. 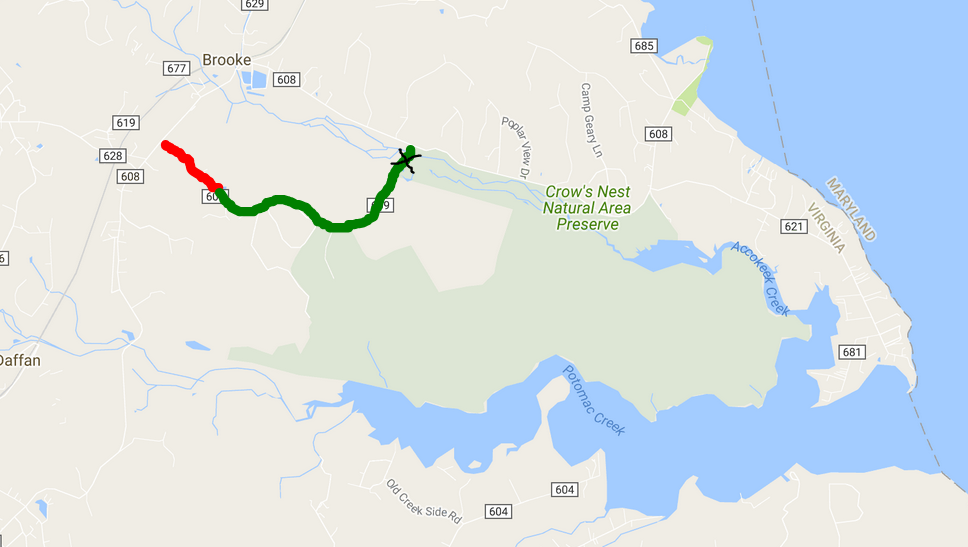 A replacement bridge–X on the map–is being installed near the main gate to Crow’s Nest. The State maintains the green portion of Raven Road as a gravel road; the red portion is a private road. However, Stafford County now wants to pave the road to Crow’s Nest (see below). 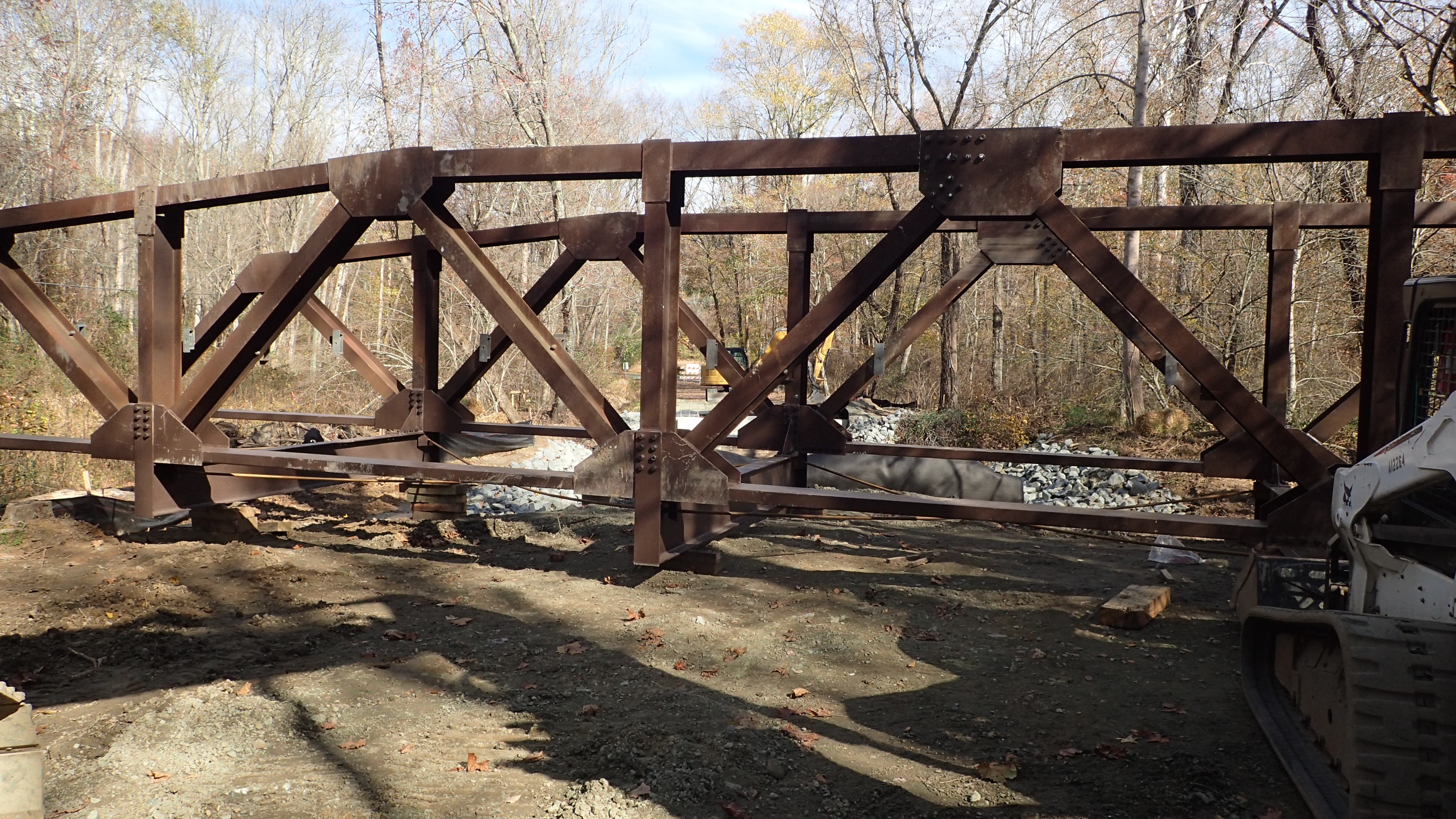 Paving a Road to Crow’s Nest?  One troubling development is a new effort to literally pave the road that leads to Crow’s Nest.  Currently, access to Crow’s Nest’s main gate is via Raven Road at the northeast intersection with Brooke Road.  Approximately 1.2 miles of Raven Rd. is a State maintained gravel road (in green in the map above). Raven Rd. extends for an additional 0.4 miles on private property (in red above).

This summer the Stafford Board of Supervisors voted to add the private portion of Raven Road to the State’s, over the objections of property owners.  The rationale given by Supervisors included making access to Crow’s Nest easier and creating a cut-through for people leaving the nearby VRE commuter rail station. While one Raven Road resident at the hearing supported the move to have the State take on the task of maintaining the road, other residents—including a landowner whose land would be essentially taken—opposed the move, citing the increased traffic and trash it would generate, the destruction of the rural feel of the road, and the possibility that this is simply paving the road (literally) for future housing development along Raven Road and on Crow’s Nest at taxpayer expense.  Speakers also expressed concern that the Board appeared willing to use eminent domain–ignoring private property rights–to facilitate development on Crow’s Nest. We’ll be monitoring this situation at it develops.

Enjoy our gorgeous Fall weather and keep an eye out for further Crow’s Nest updates. 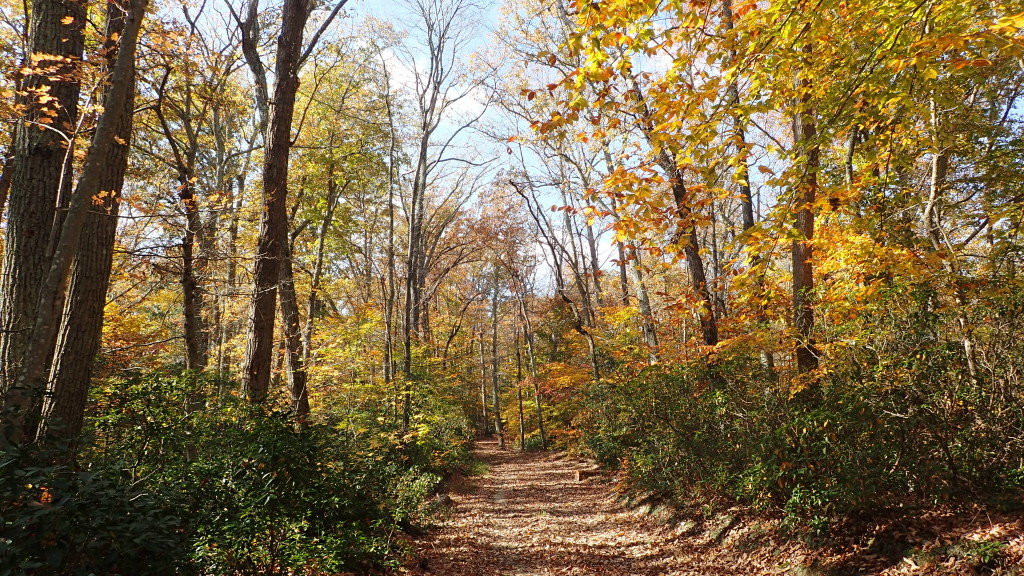