The access road to the portion of Crow’s Nest that has been purchased and preserved is now open to the public each Thursday through Sunday.  (The area remains closed on Monday through Wednesday for ongoing work by the state Department of Conservation and Recreation, which manages the property.) New signage marks the road, several trails are now fully marked, and a portion of the peninsula is available for public access. 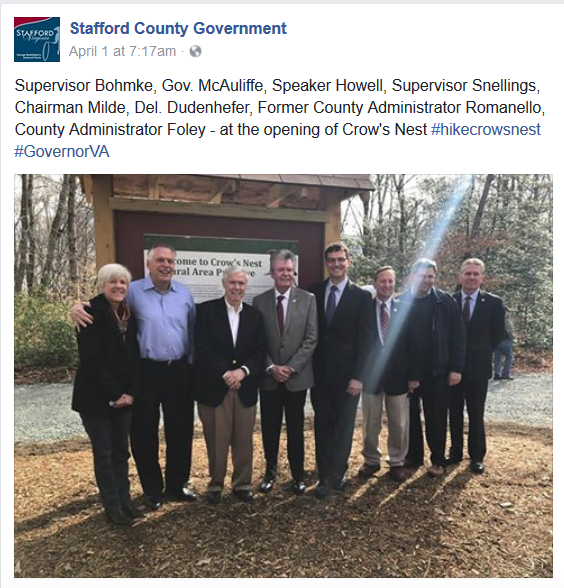 The April 1 invitation-only ceremony marking the occasion was not publicized in advance.  Instead, it appears local Republican politicians maneuvered to exploit the event for political purposes.  Local Republicans—notably Supervisor Paul Milde, who represents the district in which Crow’s Nest is located and who is up for re-election this year—attended the ceremony and photo opportunity.  The state’s Democratic governor, Terry McAuliffe, attended the event, but local Democratic officials who participated in the purchase of the property, including former Supervisors George Schwartz and Bob Woodson, were not invited.  The public was also excluded, reportedly because of space limitations in the parking area where the ceremony took place.  In contrast, the dedication ceremony in 2008, marking the creation of the Crow’s Nest Natural Area Preserve, was much more inclusive and non-partisan.

This event could have been a celebration of the progress made in saving Crow’s Nest coupled with a call for renewed efforts to get the job done.  Instead, sadly, the event held on April Fool’s day was used for political posturing.

The new Crow’s Nest access road is a living symbol of a preservation effort only half completed.  If you drive the first mile of the access road behind the gates marked “Crow’s Nest Natural Area Preserve” (dotted line on the map below), most of what you see is not part of the Preserve.  As the map below shows, only a small strip of land (mostly wetlands) to the north of the access road is preserved.  The big swath of land to the south remains privately owned and may still be developed. 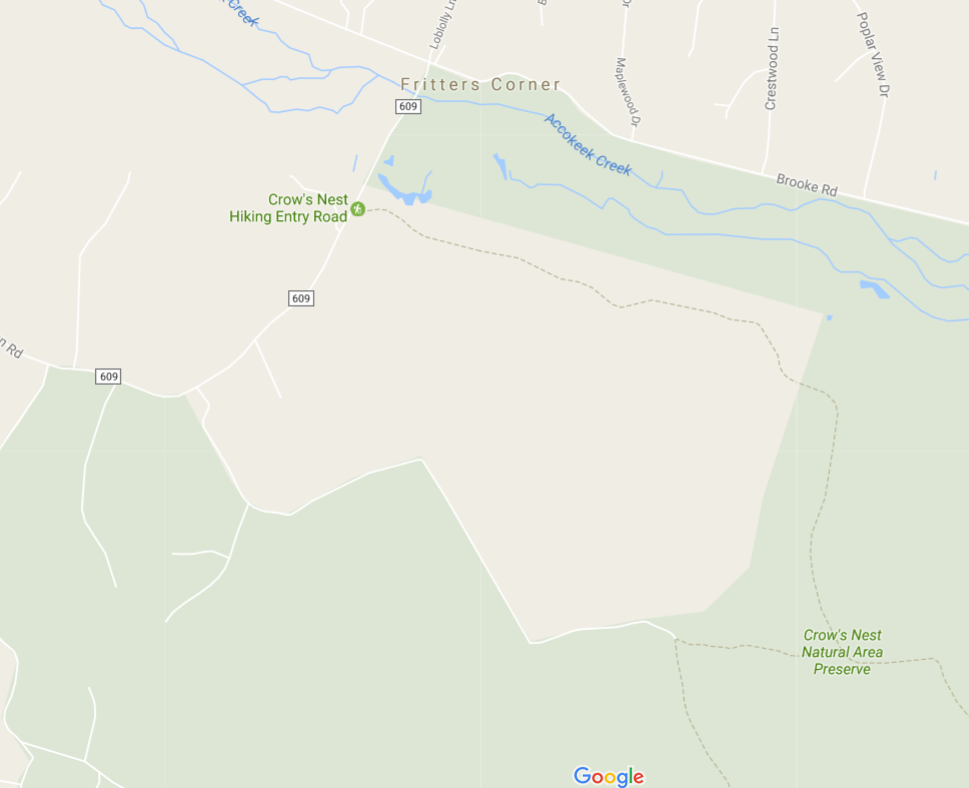 Indeed much of the Crow’s Nest peninsula remains threatened, despite ceremonies and photo opportunities. This includes nearly 1,000 acres that has already been subdivided for nearly 350 houses (brown areas south of Brooke Rd. in the map of the above). This area is known as Crow’s Nest Harbour.

Our focus remains—as always—on preserving Crow’s Nest.  We’re not particularly concerned with who gets “credit” for it or who is included in photo opportunities to be used on campaign brochures.  We are concerned with preserving the entire Crow’s Nest peninsula and making it available to the public for responsible recreational use.  We are concerned that photo opportunities of the sort that took place earlier this month actually undermine preservation efforts, since they give the false impression that Crow’s Nest is already saved and our work is done.  Nothing could be further from the truth.  Anyone involved the effort to preserve Crow’s Nest knows that development pressures continue to threaten the peninsula.

Progress has been made and should be celebrated. But don’t let slick photo opportunities distract you from the fact that the job is not done.  Crow’s Nest is not yet saved.