In 2005, your work with “Save Crow’s Nest,” combined with the excellent effort of other concerned citizens and organizations in the area, ensured that Crow’s Nest remained in the spotlight throughout the year and that plans to develop the peninsula were scrutinized.  Some of these actions were very public and visible, others were not.

A brief review of some of the year’s highlights is presented below, along with a look ahead at 2006.

Stafford Lakes LP (also known as K&M Properties) began the year with the submission of a plan to develop the Crow’s Nest peninsula. The preliminary plan proposes 688 single-family dwellings on two parcels totaling 3,230 acres. (It is the largest land area of any preliminary plan ever considered by the County). Combined with the trips that will be generated by development of the adjacent Crow’s Nest Harbour, the subdivision would lead to more than 10,000 additional cars a day on Brooke and Raven Roads—a staggering number for this part of the County.

Although the developers seemed to think that approval of the plan would happen quickly, scrutiny by citizens and Save Crow’s Nest led to a careful review of all elements of the plan. Save Crow’s Nest hired a consultant to review the plan, submitted comments to the Stafford County Department of Planning, participated in technical reviews of the plan, and rallied citizens to present their concerns to the Planning Commission.

At this writing, the plan is on hold, due largely to the efforts of a newly formed non-profit, the Crow’s Nest Defense Fund LLC. [top]

Recognizing that the fight to save Crow’s Nest would need to extend into the courtroom to ensure that the law was followed, citizens of Stafford County created a non-profit organization, the Crow’s Nest Defense Fund LLC, to protect the natural and cultural resources on the Crow’s Nest peninsula.  (Contributions to the Defense Fund are tax-deductible.)

The Defense Fund retained David Bailey, a prominent Virginia environmental and land use attorney. Mr. Bailey filed an appeal to the Stafford County Board of Zoning Appeals (BZA) on behalf of citizens whose property would be adversely impacted by the failure of the Crow’s Nest plan to comply with the entire zoning ordinance. This appeal stopped all action on the plan.

The developers have filed suit in Circuit Court against this action, seeking to compel the County to forward the plan to the Planning Commission for review, and to prohibit the BZA from hearing the appeal. The Circuit Court will hear the developers’ suit on January 6, 2006. 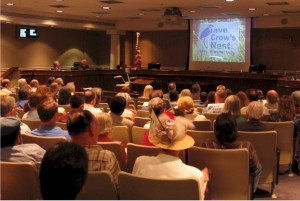 The video about Crow’s Nest was screened in the Board of Supervisor’s chambers, as well as at a variety of community events.

One of the most inspiring moments of 2005 was the premier of “Crow’s Nest: Stafford’s Last Refuge,” a short film directed by local activist (and now Planning Commission member) Archer DiPeppe and produced by Ken and Julie Jordan.

An overflow crowd of nearly 200 people gathered on August 30 to watch the film’s debut, which featured beautiful footage of the peninsula and appearances by Hal Wiggins (a biologist in the U.S. Army Corps of Engineers’ Fredericksburg field office), Robert Two Eagles Green (chief of the Patawomack tribe), D.P. Newton of the Stafford Civil War Museum and Research Center, and local environmentalist Patricia Kurpiel, among others.

The film has been a significant outreach tool and an important reminder of the beauty that is Crow’s Nest. 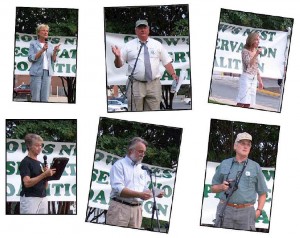 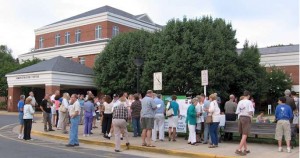 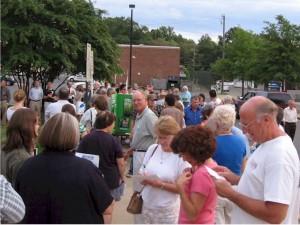 A number of local and state organizations sponsored a rally and speak-out at the September 20th meeting of the Stafford County Board of Supervisors.  They united for the event under the umbrella of the “Crow’s Nest Preservation Coalition,” coordinated by Anne Little. Hundreds of people came to urge the Board of Supervisors to act before it was too late, and to view the recently-released Crow’s Nest video, which was also shown. The large crowd overwhelmed the Board of Supervisors chambers, spilling out into the halls of the County Administration Building.

At the same time, an op-ed in the local paper outlined ten things the Board could do to help save Crow’s Nest—most at no cost to taxpayers.  This list belied the claims by some Board members that their “hands were tied” when it came to acting on behalf of Crow’s Nest.

Citizens spoke out for Crow’s Nest throughout the year in a variety of forums.  For example, over 30 letters to the editor supporting the preservation of Crow’s Nest were published by the Free Lance-Star in 2005, in addition to numerous news stories and editorials on the subject.

5. Around Town: “Save Crow’s Nest” talks to citizens at numerous community events

While big events got the media attention, behind the scenes “Save Crow’s Nest” volunteers were everywhere this year, talking to citizens about the importance of preserving Stafford’s largest tract of undeveloped land.  Whatever the community event—Salute to Stafford Day, Hartwood Days, the Rotary Club’s “Wings, Wheels and Ducks,” or meetings of local civic organizations and church groups—the response was universal: residents want to preserve a piece of Stafford’s natural history for future generations by saving Crow’s Nest.

Save Crow’s Nest also helped maintain the profile of the issue by producing bumper stickers and buttons, which have been spotted as far north as New York and in our fair capital, Richmond. Email savecrowsnest@savecrowsnest.org for information on how you can get a bumper sticker to sport on your car or earn a button for your lapel!

6. Time for Change: Crow’s Nest is a major election issue.

2005 was also the year of a dramatic Fall election, in which all four Supervisors up for re-election were voted out of office. Save Crow’s Nest is a non-partisan organization and did not make endorsements.  However, we asked candidates to specify their position on Crow’s Nest and reported the results on our web site.  Two of the successful challengers, George Schwartz (D-Falmouth) and M.S. “Joe” Brito (I-Hartwood), outlined the steps they would take to preserve Crow’s Nest in their pre-election candidate questionnaire.

In the post-election analysis, one newspaper called Crow’s Nest one of the top issues the incoming Board would need to address (Free Lance-Star), while a local columnist gave an end-of-year “cheer” to Stafford voters who threw out incumbents “indicating displeasure at so much indecision, balled up in red tape.  To wit: Crow’s Nest” (Stafford County Sun 12/30/05).

The Fall elections showed that saying you support Crow’s Nest is not enough for Stafford voters; elected officials must act to preserve the County’s largest tract of undeveloped land.

We expect 2006 to have a flurry of activity concerning Crow’s Nest.  To keep citizens informed—and elected officials accountable—Save Crow’s Nest is launching a new “report card” on our website that will summarize developments relevant to Crow’s Nest and record the votes of Board members.  Supervisors can earn a “blue heron” for votes that move forward the effort to protect Crow’s Nest, and a “bulldozer” for votes that facilitate development of Crow’s Nest.  We hope this information will assist citizens in assessing the performance of the Supervisors.

This also will be a critical year for legal action on behalf of Crow’s Nest. The developers have deep pockets and have already moved beyond their usual representation to hire additional assistance in their legal battles.  They responded to the first legal action by the Crow’s Nest Defense Fund by hiring the largest law firm in Virginia.  But to no avail; the first action by the Defense Fund has been very successful. But the legal fight has only begun, and the Defense Fund will need your financial support to continue it. Please consider making a tax-deductible donation to: Crow’s Nest Defense Fund LLC, PO Box 102, Brooke VA 22430.

We thank you for your successful work in 2005.   Together we have made a difference.  The effort continues, the stakes are rising, and “Save Crow’s Nest” will need your assistance more than ever in 2006.