A year after “Save Crow’s Nest” first went before the Stafford County Board of Supervisors to ask them to preserve Crow’s Nest, members returned. During the interim year, the property owner moved forward with plans to develop Crow’s Nest, while the Board took little action to save it. In particular, the Board had not yet accepted a low-interest loan from the state to purchase Crow’s Nest.

SCN members attended the January 18, 2005 Board of Supervisors meeting and participated in the public comment period to remind Board members that we still expect them to act in the interest of the County and save the entire Crow’s Nest peninsula.  Members stood in support while a statement was read on behalf of the organization.  Some individual supporters then added their comments.   On the same day, an op-ed piece by SCN members was also published. 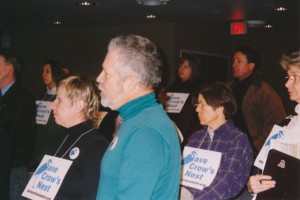 On a frigid winter night, these “Save Crow’s Nest” members were among those who attended the Board of Supervisors meeting. 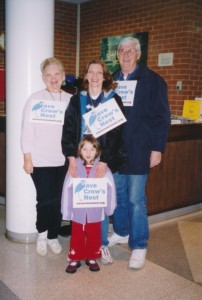 Members in attendance included three generations from one family.