Once again, the Stafford Board of Supervisor’s lack of action to protect Crow’s Nest has left the resources on the peninsula vulnerable to irreparable damage. (Read the SCN press statement.)

On Friday morning October 27, Save Crow’s Nest (SCN) confirmed that over 150 relic hunters in more than 40 vehicles had converged on the historically-significant and environmentally-sensitive Crow’s Nest peninsula for the Grand National Relic Shootout (GNRS), a three-day contest that pits relic hunting teams against each other.  (See photos below.)  SCN contacted County officials questioning the legality of the hunt and alerted its members to the incursion on the much-disputed property.  At first, the lawyer for the property owners denied there were relic hunters on Crow’s Nest, suggesting instead that it might be game hunters.  After Save Crow’s Nest presented evidence to the contrary, the lawyer maintained that the owners knew nothing of this event and considered the relic hunters to be trespassing.  He said a caretaker who had previously been employed to manage the property had signed a contract with the relic hunters without the authorization of the property owners.  By the end of the day, the property owners requested that the Stafford County Sheriff intervene to evict the trespassing relic hunters. 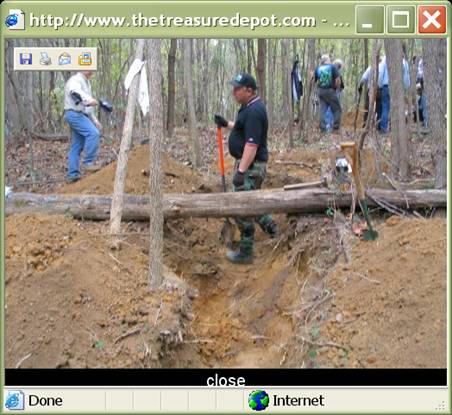 Screenshots from the group’s web site shows the type of damage that can be done on relic hunts. 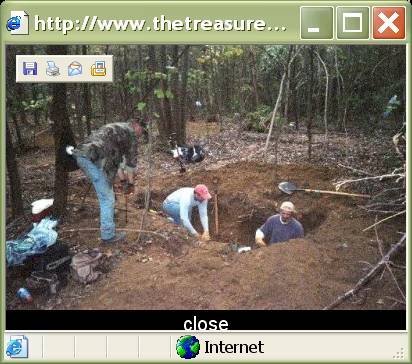 The next day, at a press conference organized by Save Crow’s Nest, Glenn Trimmer a long-time local relic hunter and co-founder of the Friends of Stafford Civil War Sites put it simply: Crow’s Nest was “probably the worst site [GNRS] could have picked” for a large-scale relic hunt.  Speaking at the same press conference, Save Crow’s Nest member, Cecelia Kirkman, said, “I want to make clear that we are not ‘anti-relic hunter.’ We recognize that when governments fail to preserve historically significant sites, relic hunters who act responsibly can play an important role in preserving historical artifacts. Our beef is not with GNRS, and we extend an open invitation to them to meet with us to set the record straight.”  Instead, Kirkman noted, anger over damage to the peninsula “needs to be directed at K&M Properties, and the County…. We are here today because the Board of Supervisors has not acted decisively to protect Crow’s Nest.” (Read the SCN press statement.)

Left in the lurch through all of this were over 150 relic hunters who paid $200 apiece and traveled from all over the country to be part of the “Grand National Relic Shootout.”  The weekend’s event had been planned for nearly a year and is conducted annually at different locations. The GNRS actions are so controversial that plans for the event are kept secret.  Participants are not even told the precise location of the “Shootout” until the night before the event begins.  Relic hunters use metal detectors and other equipment to identify historic relics buried in the ground.  They then dig holes or trenches to unearth whatever they can.  The relics are often sold. This particular event pits different teams against each other to see who can unearth the greatest number of relics with the greatest value.  As if it were a sporting event, trophies are awarded to “winners.”

Many questions remain unanswered at this writing: 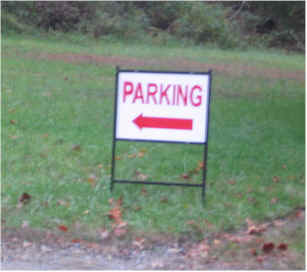 Vehicles began streaming in the main gate in the early morning hours. 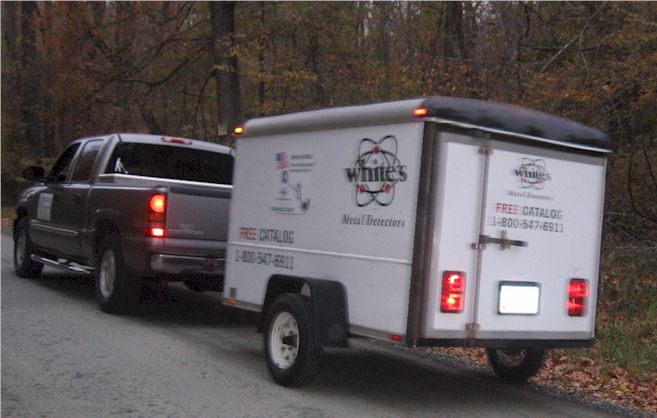 Among the vehicles were ones clearly marked as relic hunters. The trailer above advertises “White’s Metal Detectors” and the truck sports the name and address of an Alabama relic hunting company. 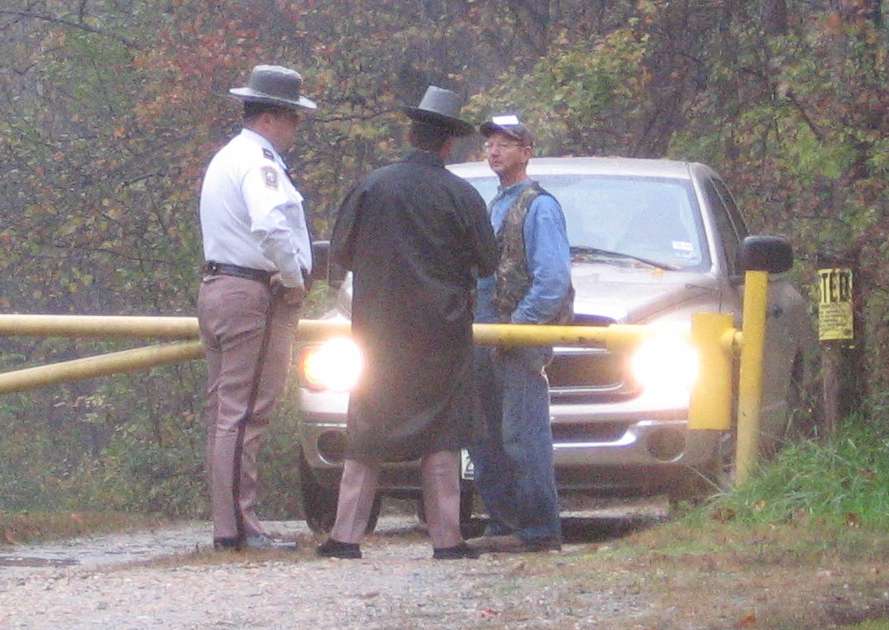 Later in the afternoon, after a flurry of activity regarding the hunt, Stafford police discuss the situation with a relic hunter who remains behind a locked gate. Apparently the relic hunter claimed they could produce a signed contract and left to retrieve it. 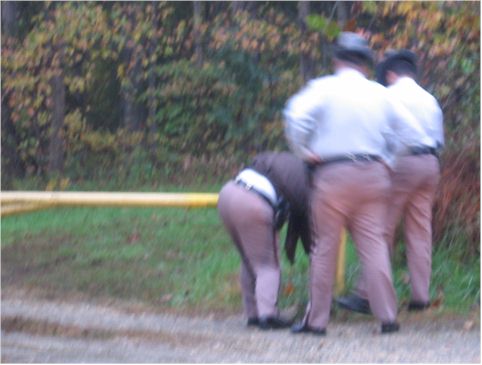 After a long delay when the relic hunters failed to return to the gate, police moved to cut the lock on the gate with bolt cutters. This proved impossible due to the gate’s tamper-proof lock mechanism. 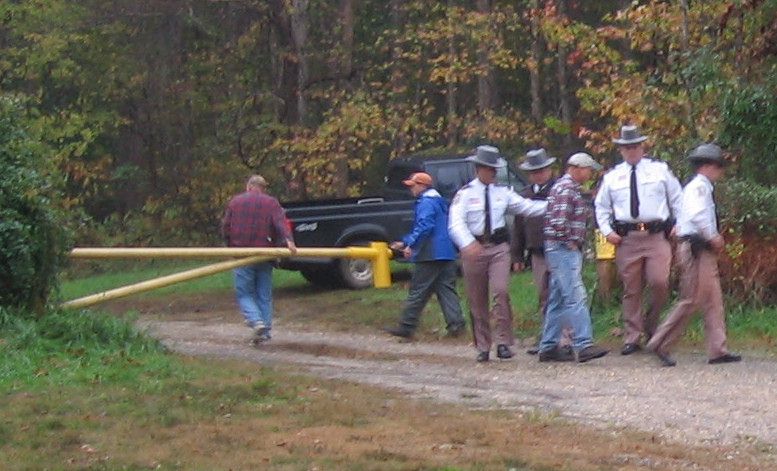 When Clark Leming, the property-owner’s lawyer, arrived (plaid shirt and hat), the gate was unlocked and police were finally allowed to enter.

At the end of the day, a vehicle speeds out the the front gate following a line of relic hunters who exited Crow’s Nest. The relic hunt is over. 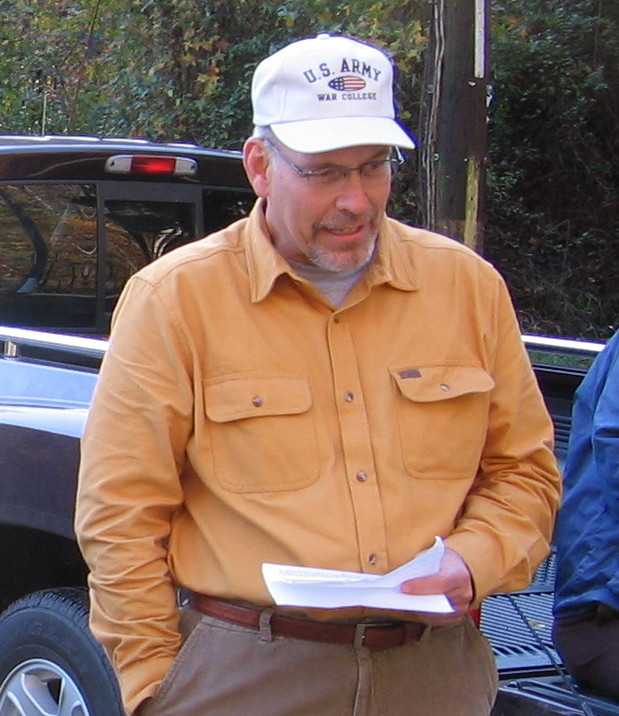 Long-time relic hunter, Glenn Trimmer addresses Save Crow’s Nest supporters and press at the front gates of Crow’s Nest. He and other speakers stressed the importance of permanently protecting the peninsula.