“Refuge Proposal Dies.”  That startling headline appeared on the January 9, 2004 front page of The Free Lance-Star.  (See story.)  For most people, it was the first time they heard that K&M Properties, the largest landowner on the peninsula, had broken off negotiations with the Virginia Department of Conservation and Recreation and the Trust for Crow’s Nest.  Instead of selling the land to the State of Virginia for preservation, K&M was now talking about developing portions of Crow’s Nest into high-density “cluster housing.” 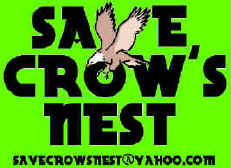 Featuring an American bald eagle (which nest on Crow’s Nest) and the name of the newly-formed Save Crow’s Nest , this bright placard worn by the dozens of supporters at the Board of Supervisors meeting.

Only days after this story was made public, “Save Crow’s Nest” was born and over 60 people attended the Stafford County Board of Supervisors meeting to express their concern to the Board.  (See The Free Lance-Star story on our formation and this first action.)  Many people wore green to show their support and most wore a bright green placard calling for the Board to “Save Crow’s Nest.”

During the public comment period, 21 people spoke out to make their views known to the Board.  They called for the Board to redouble their efforts to ensure the protection of Crow’s Nest.  They also called into question the reappointment of attorney Clark Leming to the County’s Utilities Commission.  Since Mr. Leming represents K&M Properties, speakers raised the possible appearance of a conflict of interest if he also sat on a commission whose decisions could impact the future of Crow’s Nest.  (See The Free Lance-Star story on Clark Leming.) 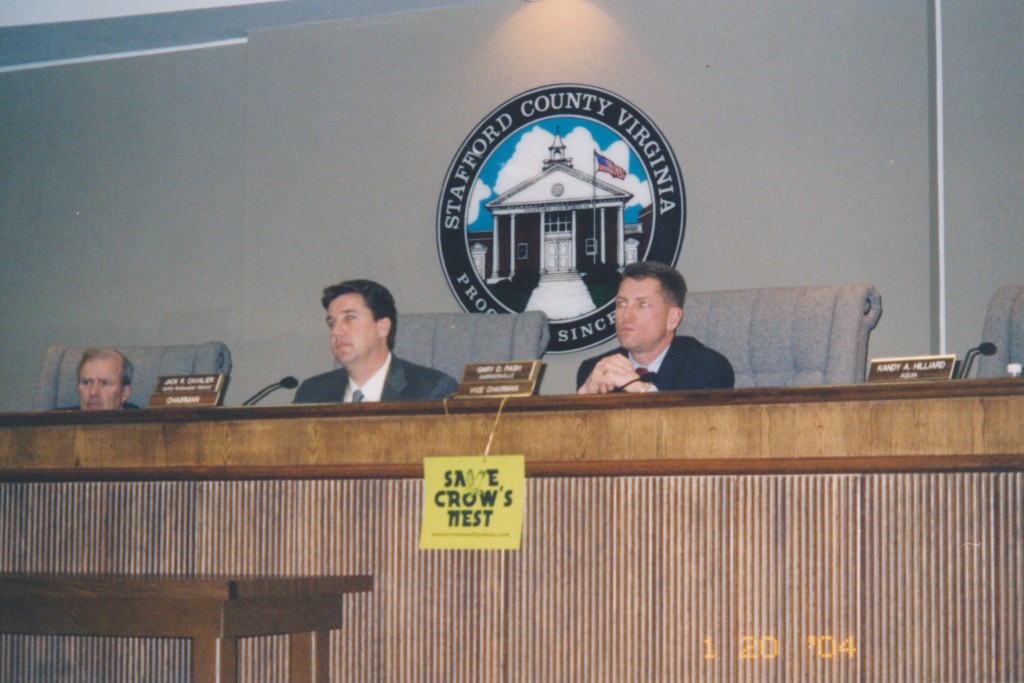 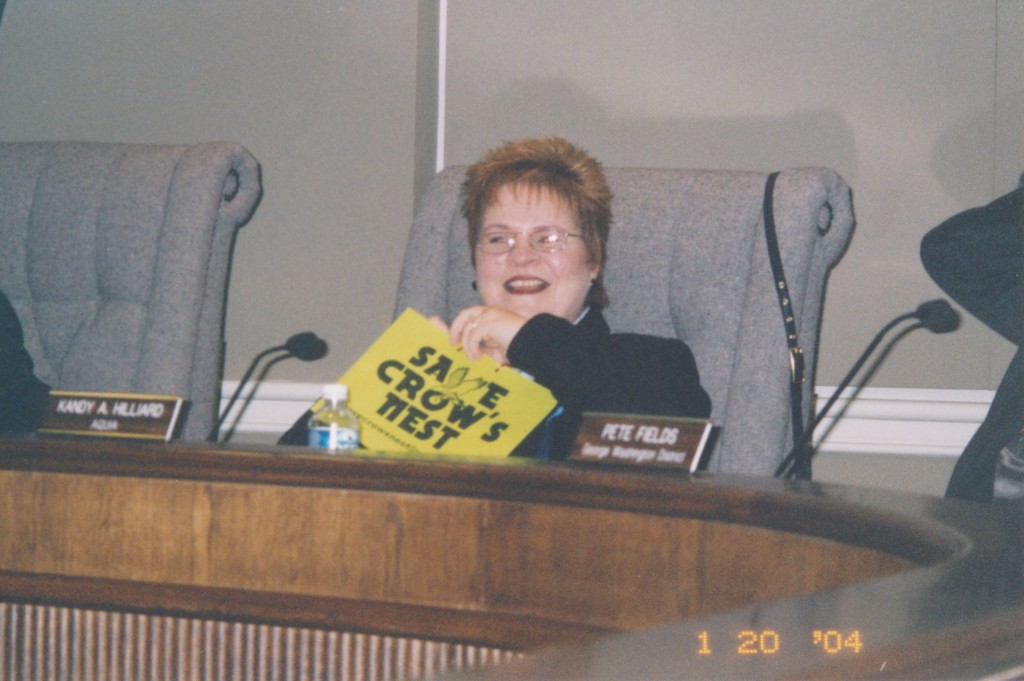 The Board of Supervisors expressed support for saving Crow’s Nest.  Several wore our placards during the comment period.  Supervisor Gary Pash hung the placard from his podium microphone.

The remarkable turnout and heartfelt comments about Crow’s Nest reflected a general sense of disappointment and anger at K&M Properties’ abandonment of the negotiations to sell their property.  The action also clearly announced that there was no “done deal.”  The people of Virginia will fight to save Crow’s Nest!

“You can count on us to stand by you and support Crow’s Nest.  Each and every one of us is supportive of the whole project.  Whatever you do, don’t accept defeat.  Do battle here and do your best to save this.”

—Jack Cavalier, Chairman of the Stafford Board of Supervisors 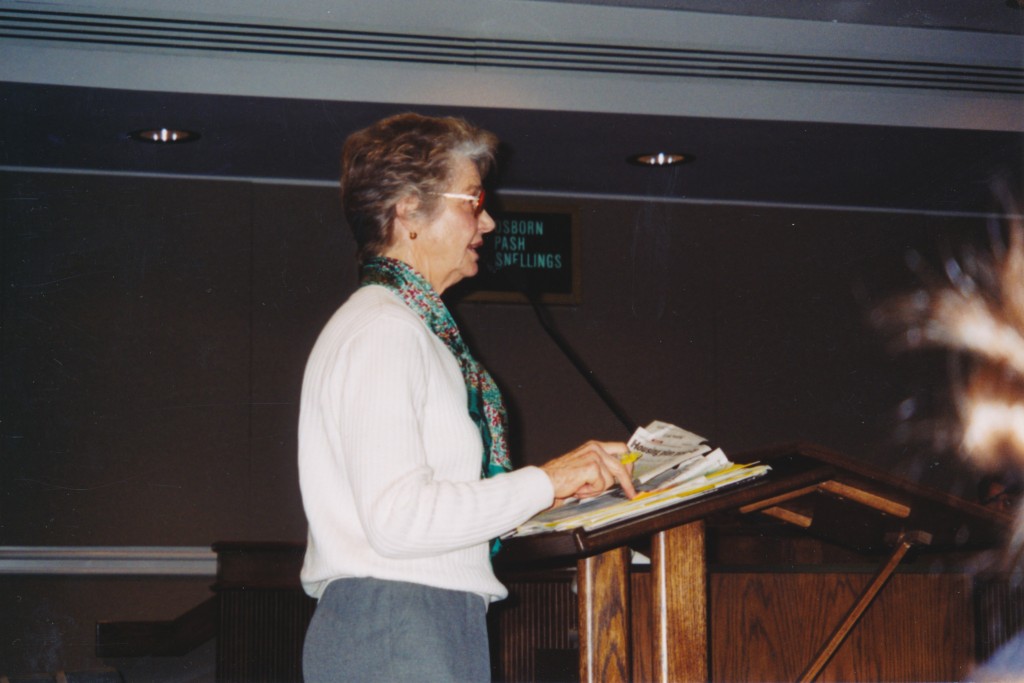 Doris Whitfield, head of the Battlefields Sierra Group in Fredericksburg, tells the Board of her concern for Crow’s Nest. 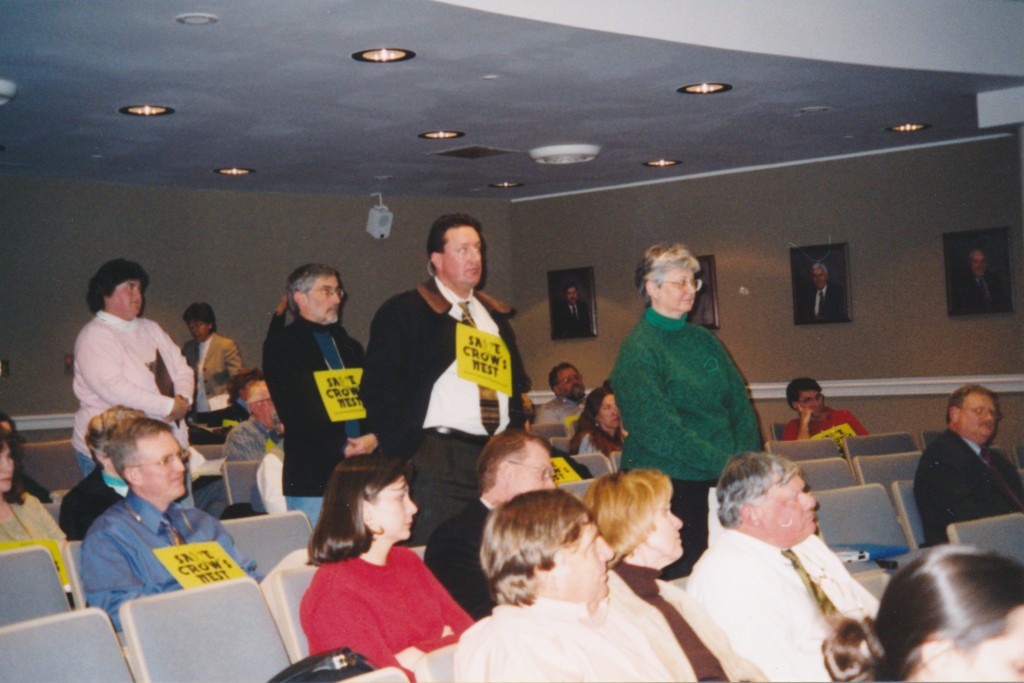 Citizens line up and await their turn to speak in favor of saving Crow’s Nest.

–a citizen speaking at the Board meeting