The Stafford County Planning Commission recessed on December 7 without hearing the plan to develop Crow’s Nest.   The Commission is now scheduled to take up the plan when their meeting resumes at 7:30 pm on December 19.

But attorney David Bailey told the Commission that their placement of the item on the evening’s agenda was illegal.  That’s because earlier in the day, Bailey, retained by the Crow’s Nest Defense Fund, LLC, filed an appeal on behalf of Linda and Jack Fellers to the Stafford County Board of Zoning Appeals (BZA) regarding Planning Director Jeff Harvey’s decision that the Crow’s Nest site plan met all requirements of the County Code. By law, when an appeal is filed, all action is stopped until the BZA rules on the appeal. In this case, on the advice of County Attorney Joe Howard, the Crow’s Nest site plan remained on the Planning Commission agenda and public comments were taken on it. That, argued Bailey, is illegal. (Read his comments to the Planning Commission.) 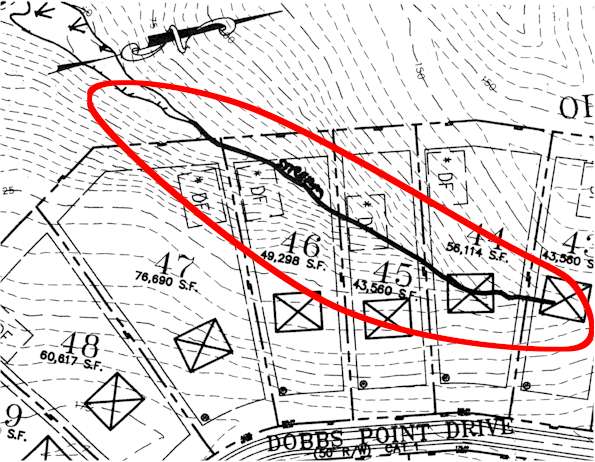 County staff certified the Crow’s Nest plan as complying with all County codes. Yet, the plan shows streams running through houses (above) and drain fields in wetlands areas (below)! 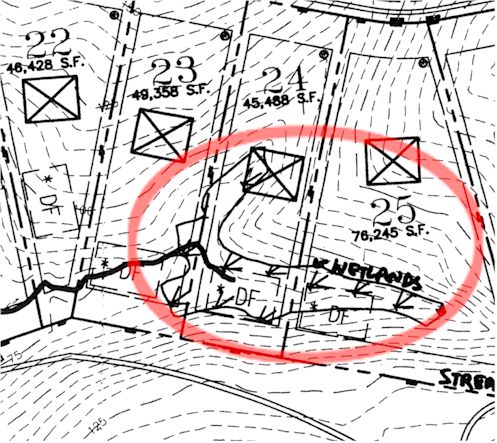 Citizens Raise Concerns
Because of considerable community concern about the Crow’s Nest plan, the Commission allowed 45 minutes of public comment at the beginning of the meeting.  Every single speaker opposed the plan citing its many technical flaws.  Despite such obvious  flaws as streams running through houses and drain fields situated in wetlands (see images above), the County Planning Director reported that the plan was in compliance with all County codes.
Among the many other technical flaws in the plan noted by speakers were those in the following areas:

The meeting (and its continuation on December 19th) is the last for several members on the current Planning Commission.  Fall elections removing four incumbent Supervisors will result in four new appointments to the Planning Commission in January 2006.