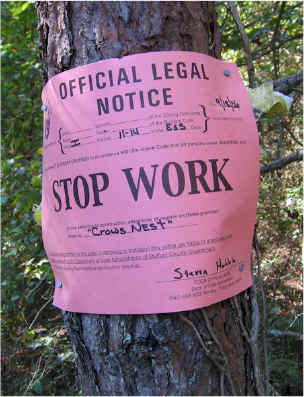 “Stop Work” legal notices are now posted on the edge of the Crow’s Nest property.

Stafford Lakes LP, the company that owns the bulk of the Crow’s Nest peninsula, has used heavy machinery to do illegal work there, including clearing underbrush and uprooting trees.  After observing some of this damage, Save Crow’s Nest filed a complaint on September 11, 2006 with the Stafford County Code Administration Department regarding suspected illegal clearing of land on Crow’s Nest.   Based on the documentation Save Crow’s Nest submitted, the County immediately sent out inspectors to the site. As a result of their inspection, the County determined that unauthorized “land disturbing activities” (clearing and grading with a front-loader) had taken place without the required permit.

The County issued a “stop work” order to Stafford Lakes LP (the property owners) to cease the work being done by Frazier Consultants (the company contracted to conduct the work). The property owners must correct the damage they have done by seeding and mulching, and cannot do any additional work until they have obtained an approved erosion and sediment control plan and a grading permit from the County.

The work being done involved “perc tests” to assess the soil’s suitability for septic systems, one of the steps needed to prepare for development.  The property owners have the right to conduct these tests, however, they did so in a way that the County has now determined illegally disturbed the land.

Unfortunately, this is just the sort of thing we have been expecting. Until the entire peninsula is permanently protect from development, we are likely to see more actions like this that advance development and disturb the environment.

Read the Free Lance-Star article on this issue.  (Clarification on this story: the County’s actions were not in response to the perc tests per se, but to the unnecessary and illegal land disturbance which occurred in the process of carrying out the tests.  Such widespread land disturbance (greater than 2500 square feet) requires a permit, which the owners did not obtain.