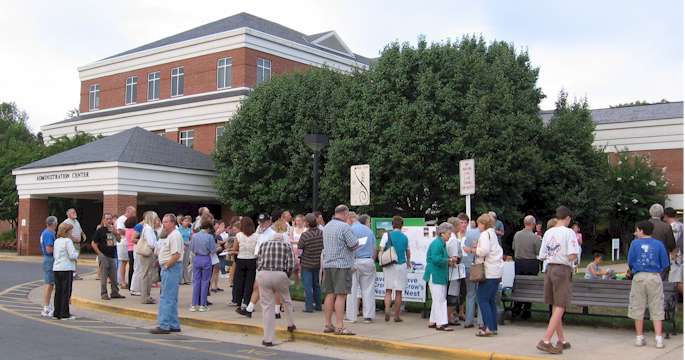 Supporters begin arriving for a rally outside the County Administration building.

Well over 200 people attended a rally organized by the Crow’s Nest Preservation Coalition before the Board of Supervisors meeting on Tuesday, September 20, 2005.  (See photos below and list of coalition members at bottom of page)

As people arrived, they were treated to musical entertainment from Bruce Callander.   Anne Little then welcomed the large crowd that had gathered, led people in chants to “save Crow’s Nest,” and then introduced the line-up of speakers from Coalition groups.  A variety of speakers went on to highlight some of the many reasons Crow’s Nest should be saved.

The plan was then to attend the Board of Supervisors meeting and take part in the public comment period which normally begins these meetings.  However, the Board of Supervisors suspended its rules and instead pushed the public comment period to nearly the end of the meeting–after brief ceremonial presentations and a much longer public hearing on several ordinances.  People waiting in the hall were not informed of what was going on.  Because of the prolonged wait, many Crow’s Nest supporters had to leave, often to attend to family responsibilities.  The action by the Board, combined with the legal limits of the room capacity, meant many Crow’s Nest supporters were not able to participate in the public comment period.  Those who remained had to wait in the hall, on the stairs, and outside for their chance to address the Board.

Once inside, the new video, “Crow’s Nest: Stafford County’s Last Refuge,” was shown .  Despite a long wait due to Board actions and a full Board chambers, many people spoke during the public comment period of the meeting.  During her presentation, the representative from Save Crows Nest provided the four board members up for re-election–Kandy Hilliard, Mark Osbourn, Gary Pash, Gary Snellings–with a candidate questionnaire about Crow’s Nest.   (See also, a Daniel family letter of support written for the occasion, a local media story about the evening, and a thank you letter from the rally organizer.)

After hearing the speakers, the Board took several actions.  First, Supervisor Kandy Hilliard introduced a resolution for the County to obtain an appraisal of the fair market value of the Crow’s Nest property.  The resolution passed 7-0.

Next, Supervisor Hilliard introduced a resolution instructing staff to prepare an amendment to the Chesapeake Bay ordinance to require critical resource protection areas (buffers) to include intermittent streams, steep slopes, and highly erodible soil.  It passed 7-0.

Finally, Supervisor Gibbons introduced a resolution to seek financial assistance from Fredericksburg and nearby counties to pay for the purchase of Crow’s Nest.  It passed 7-0. 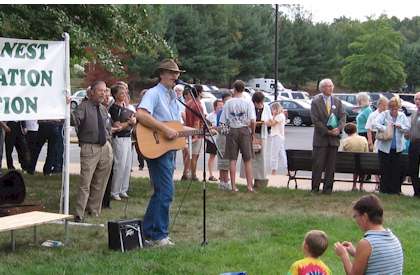 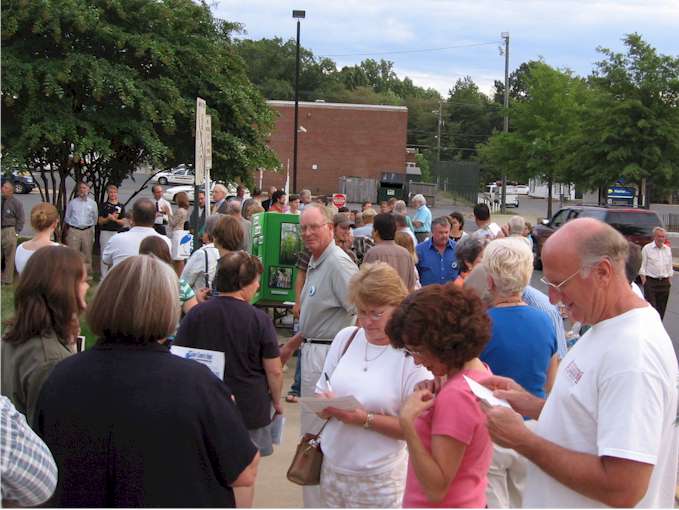 Supporters begin arriving in earnest, examining the material about Crow’s Nest and signing up as new members. 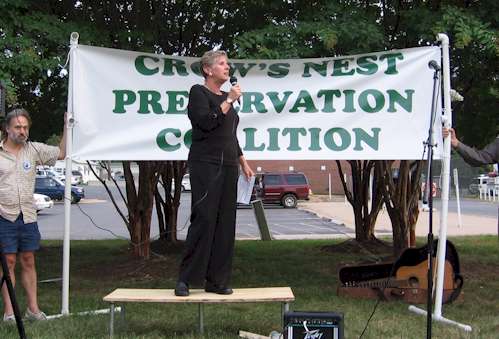 An organizer of the rally, Anne Little, welcomes the crowd. 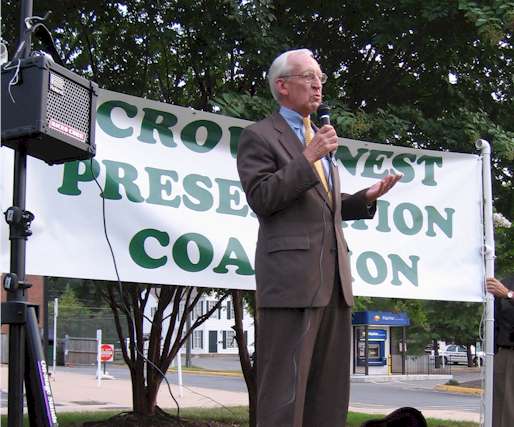 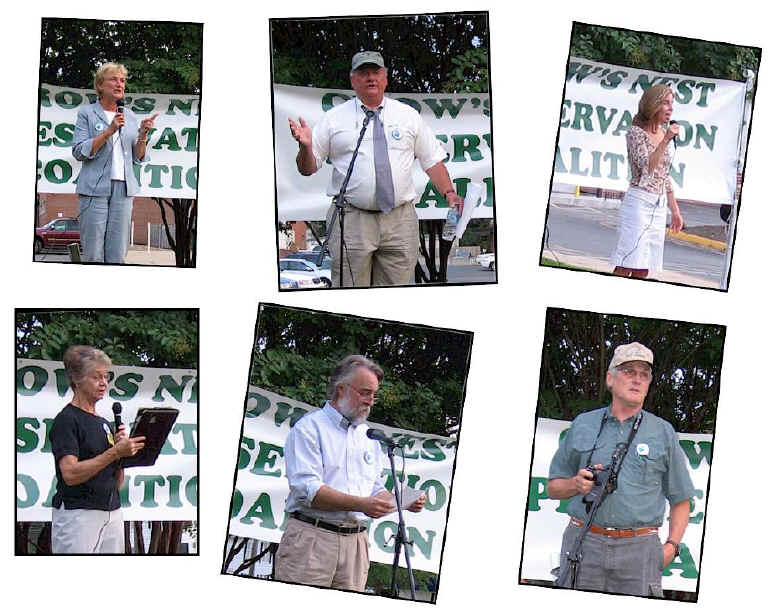 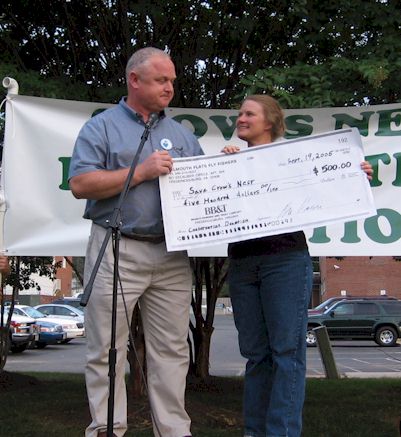 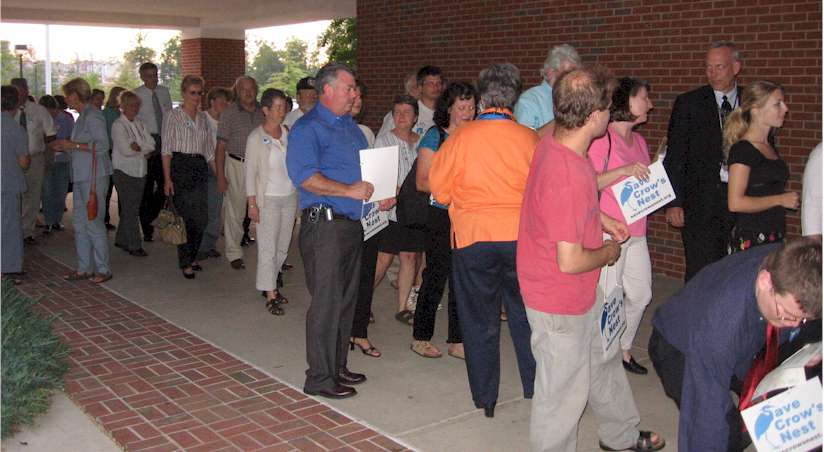 A large number of Crow’s Nest supporters turned out for the rally and then proceeded inside to the public comment period of the Board of Supervisors meeting.

Students from the University of Mary Washington head to the Supervisors meeting. 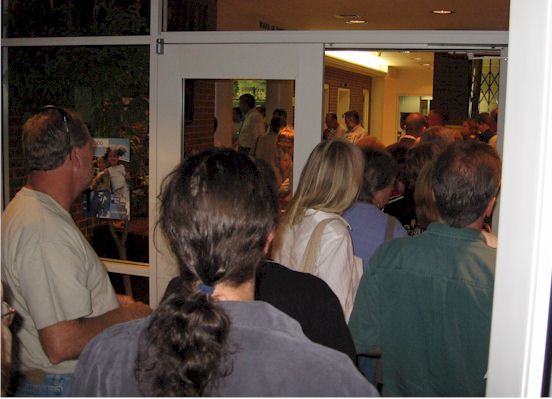 The Board chambers were full and the Board suspended the rules to move the public comment period towards the end of the meeting. This left Crow’s Nest supporters stranded, crowding the entryway to the building waiting to get in. The line of supporters waiting to get in snakes out the door to the unseasonably hot and humid exterior. 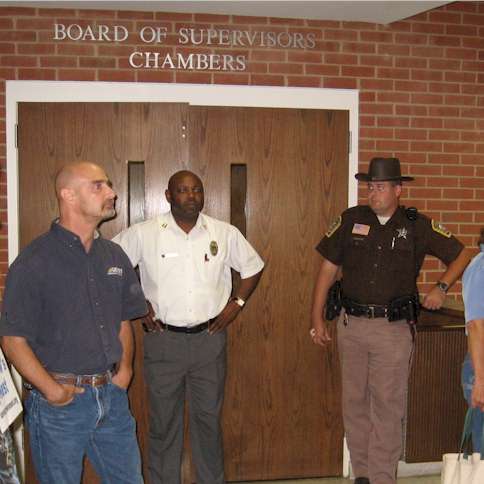 With a full house, fire and law enforcement officials monitored the door allowing Crow’s Nest supporters inside only when other people left the chambers.

Closed doors meant a long, unexpected wait in the hall for many Crow’s Nest supporters. Many people were never able to get in because they had to leave for other commitments. 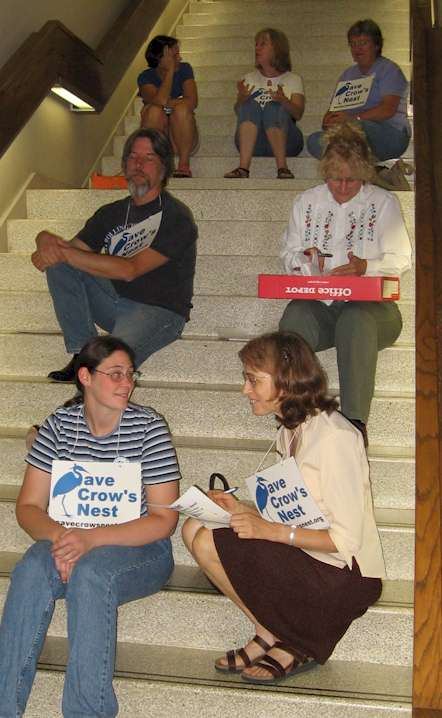 These folks took to the stairs for the long wait. 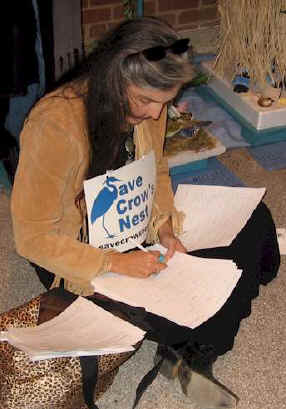 This teacher used the waiting time to grade student papers. 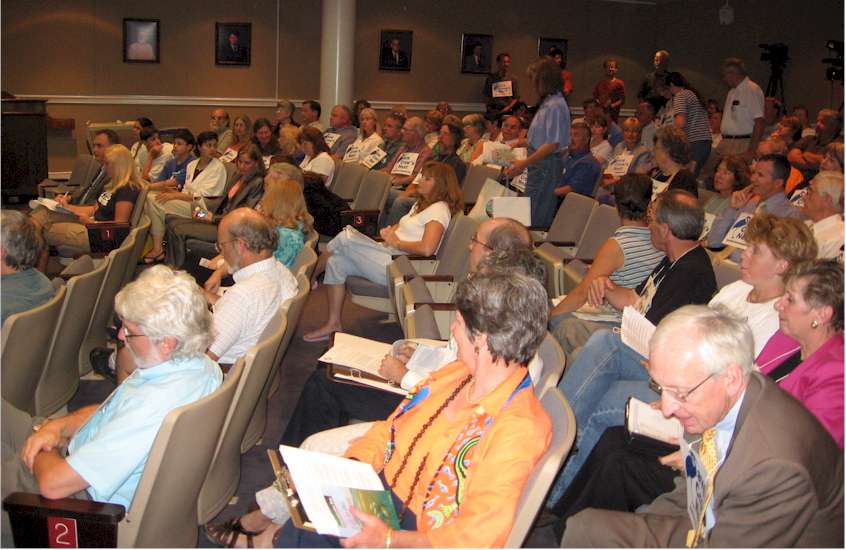 Finally, Crow’s Nest supporters make it inside and begin filling the chambers. 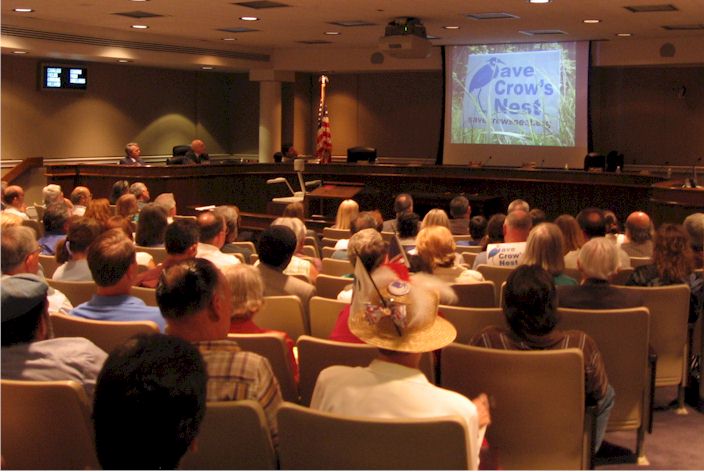 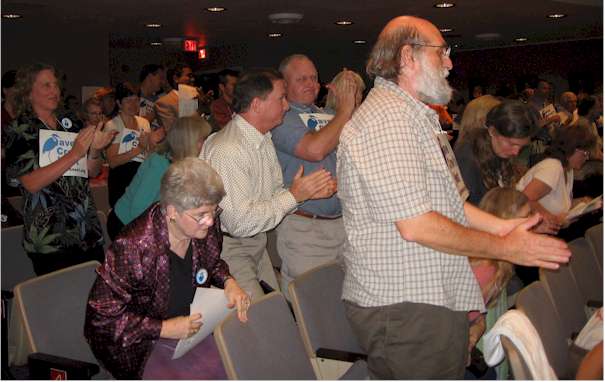 As the film ended, the audience rises for a standing ovation. 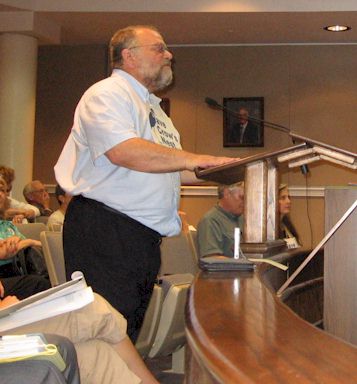 Appropriately, the first speaker in the public comment period was Archer DiPeppe, one of the filmmakers of the Crow’s Nest video.

Joe Lerch, from the Chesapeake Bay Foundation, explains to the Board of Supervisors the regional importance of saving Crow’s Nest. 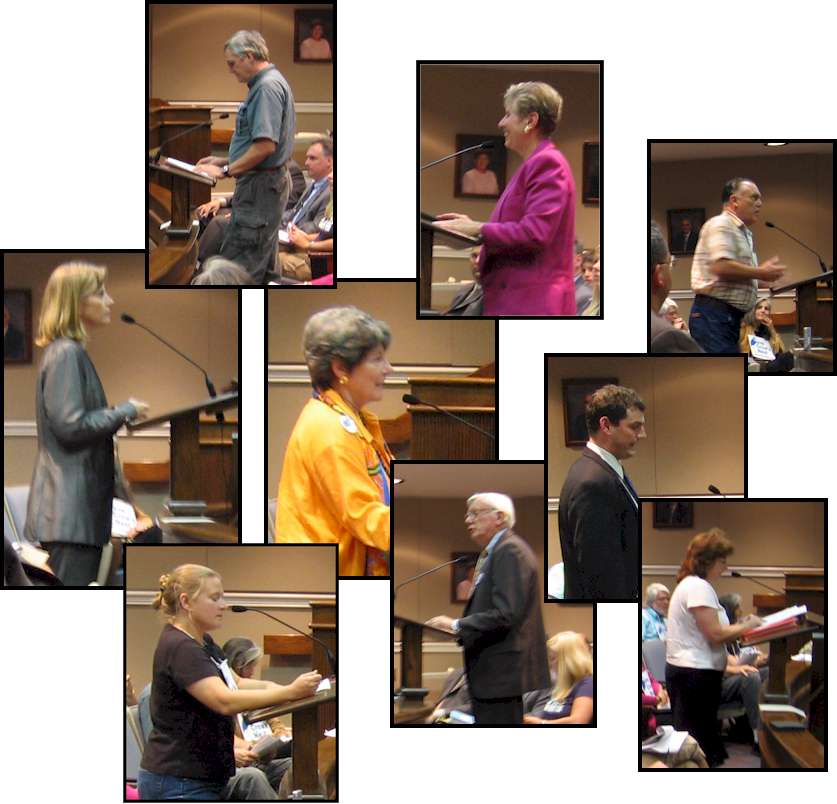 Just a few of the many people who encouraged the Board to act to save Crow’s Nest. 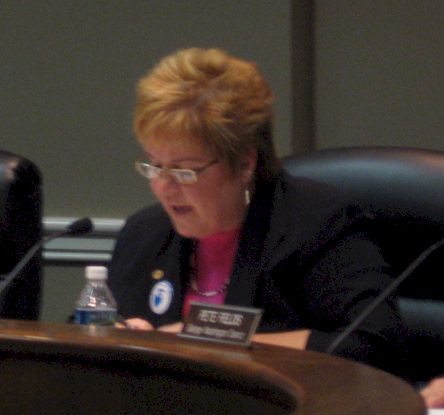 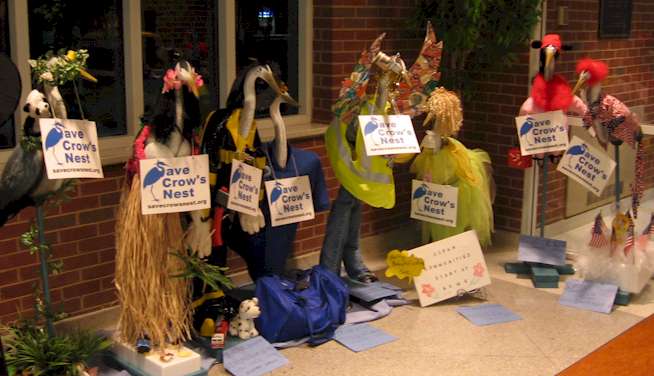 After a long night, these heron statues in the hallway outside the Board of Supervisors chambers (left over from the recent Salute Stafford Day) continued to deliver the message.

Thanks to everyone who came out to support saving Crow’s Nest.  If you couldn’t make the event, or couldn’t make it inside because of the long wait, you can still contact members of the Board of Supervisors and let them know of your support for Crow’s Nest.  Let the public know, too, by writing a letter to the editor of the Free Lance-Star and the Stafford County Sun