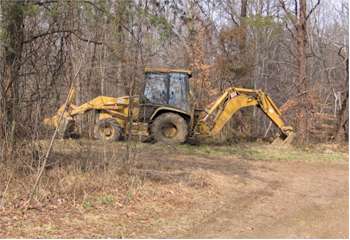 Heavy machinery is seen on an almost daily basis on Crow’s Nest. This picture was taken in March 2007.

On Monday, April 2, Stafford Lakes LP (also known as K&M Properties) submitted a plan for the development of nearly 300 acres on Crow’s Nest. The proposed subdivisions and construction of more than sixty homes will be done on areas previously designated by the owners as “open space” in earlier development plans, and includes acreage not included in the Board of Supervisors’ purchase offer.  (Read the news story.)

We will post more details on the proposed development plans as they become available.